The new 17-inch MacBook Pro has a lot going for it, from the faster processor, front side bus and memory speeds, to its thinner and lighter, unibody design. Add in a new battery that lasts longer per charge, and you’ve got yourself a winner. If you’re not a fan of glossy screens, the 17-inch MacBook Pro is the only Apple laptop with an anti-glare option. And though the decision to lock away the battery behind 10 screws and a warranty voiding warning sticker is controversial, the fact that the battery will last at least three times as long as the battery in the previous 17-inch MacBook Pro should lessen the sting.

When Apple announced its upgrade to the new unibody MacBooks, we were surprised to see the MacBook Pro remain in the old aluminium casing. Apple announced the new 17-inch MacBook Pro at the Macworld Expo in January, and we’ve at last had the machine in for testing.

No matter which way you look at it, this is a premium model. But it’s also an incredibly stylish laptop and the new unibody casing seems to get more impressive every time we closely examine at it. As with the MacBook and MacBook Air the unibody shell gives it a sturdy feel, yet it’s slightly thinner and lighter than before.

As before, it comes with a gorgeous 17-inch display and top-of-the-range specs across the board. The 17-inch MacBook Pro has 4GB of DDR-3 memory, a 320GB hard drive, and illuminated keyboard (now the new square-key type). As with the MacBook it sports two graphics processors, the 9600m with 512MB of GDDR-3 RAM and a 9400m with 256MB of GDDR-3 RAM. The idea is that you switch between the two depending on whether you want graphical prowess or better battery performance.

There have been some small boosts to the the processor, system bus and RAM speed, but, of course, the big change is the new battery design. Apple claims that the new laptop’s battery is 40 per cent larger than its predecessor. And this should, in theory, enable the 17-inch MacBook Pro to run for up to 8 hours on a single charge. 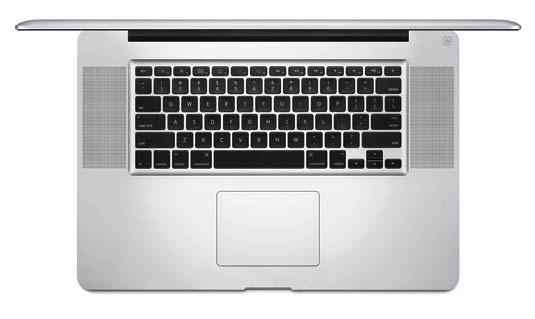 If you’re looking to upgrade the memory to 8GB we suggest, as ever, going through a third party such as Crucial for the upgrade. True to form Crucial is charging £629 for an 8GB upgrade (prices change frequently, so always check). Also you could sell the 2x 2GB sticks Apple supplies with the MacBook Pro on eBay, and you should get around £50-£80 at today’s prices.

Like all of the unibody laptops, the 17-inch MacBook Pro uses an environmentally friendly widescreen display with mercury-free LED backlighting and arsenic-free glass. The screen has a native resolution of 1,920 x 1,200 pixels, and with that many pixels occupying just 17 diagonal inches, it’s easy to have multiple windows open at once. If you’re used to working at lower resolutions, you’ll notice that everything on screen appears much smaller. I found myself having to zoom Office documents to 150 per cent in order to work on them, something I don’t have to do with my 15-inch MacBook Pro and its 1,440 x 900 native resolution.

The new MacBook design puts the glossy screen behind a thin sheet of glass. Glossy screens can look great with bright vibrant colours and deep, rich blacks. Some people, including a few of my fellow Macworld editors, despise the glare from these highly reflective glossy screens. For those gloss-phobic folks, Apple offers an anti-glare option for £34.99. We weren’t able to look at a 17-inch MacBook Pro with an anti-glare screen for this review.

As with the MacBook unibody upgrade, there are a few changes to the connections. The previous 17-inch MacBook Pro had the optical drive slot located on the front right; in the new laptop, it’s still on the right, but now on the side. All of the ports are now on the left side.

For connecting an external display, the new Mini DisplayPort takes the place of the full-sized DVI port from previous generations. At this time, Apple is the only company using Mini DisplayPort, and the only Mini DisplayPort LCD is Apple’s 24-inch LED Cinema Display (£635). Unfortunately, Apple doesn’t include a Mini DisplayPort to DVI adapter to let you connect the new laptop to the more prevalent DVI connector found on most displays – the adapter costs £20 from Apple. 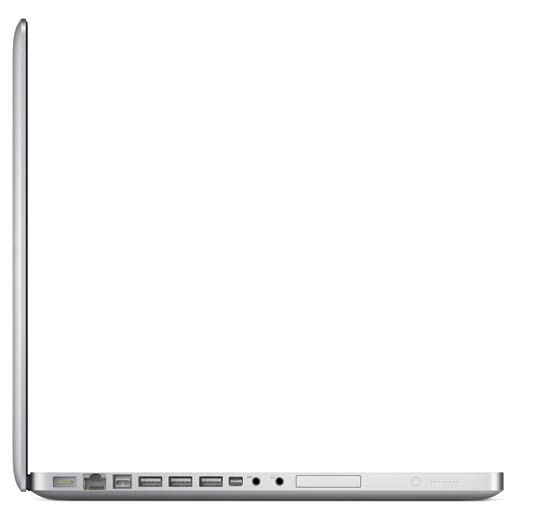 The full set of connections on the side of the MacBook Pro (the SuperDrive is on the other side).

As with the 15-inch unibody MacBook Pro, the new 17-inch MacBook Pro has a dual graphics subsystem – a high performance Nvidia GeForce 9600M GT chip with 512MB of dedicated GDDR3 memory, as well as a lower-performing, battery-saving GeForce 9400M that shares 256MB of RAM with the main processor. The previous 17-inch MacBook Pro had a single graphics engine, the Nvidia GeForce 8600M GT with its own 512MB of GDDR3 memory. Our tests found that the 9600M GT graphics offers a significant boost over the 9400M; the 9600M GT was 45 per cent faster in our Quake tests and 18 per cent faster in our Unreal Tournament tests.

Bigger, better battery The big story with the new 17-inch MacBook Pro is its battery life. The new battery is created with lithium polymer sheets instead of cylindrical lithium ion cells; this, according to Apple, creates less wasted space.

Another way to make the battery bigger is to make it a fixed part – it’s no longer user replaceable, a controversial decision to say the least. By not having to include the latches and other parts necessary to make a battery easily removable, Apple says it was able to increase the size of the battery so it can carry more juice. Apple also says that the battery’s new adaptive charging technology will significantly increase the overall life of the battery, claiming that it can be drained and charged at least 1,000 times before retaining 80 per cent of its original capacity – that’s between three and five times as many charges as most laptop batteries.

Though it’s difficult to test Apple’s 1,000 charging cycle claims, we ran other battery tests to see how long a single charge lasts. Our standard test involves looping a video at full screen from a ripped DVD saved to the hard drive, the display set to full brightness, and the Energy Saver preferences set to never sleep and to use the lower-powered Nvidia GeForce 9400M graphics. In that test the new 17-inch MacBook Pro lasted 4 hours 43 minutes, while the previous 17-inch MacBook Pro lasted 3 hours 36 minutes, and the new 15-inch 2.53GHz MacBook Pro lasted just 2 hours 46 minutes.

Our next battery test closely resembles Apple’s wireless productivity tests used for its battery life estimates. We used the same Energy Saver preference settings as our video loop test, but we set the display to half brightness and then used the laptop to surf the web over AirPort and work on office productivity apps like Microsoft Excel and Word. In this test, we were able work for just over 7 hours before the laptop entered its safe sleep state – about an hour short of the 8-hour battery life claim, but still impressive. The test result on the other two laptops: 4 hours 42 minutes for the 15-inch 2.53GHz MacBook Pro, and 4 hours 46 minutes for older 17-inch MacBook Pro. 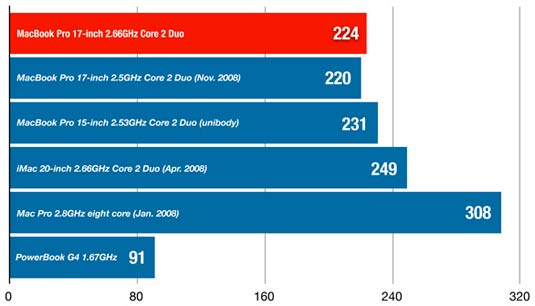 As you’d expect, with a slightly faster processor, the new 17-inch MacBook Pro outperformed its predecessor, but just a tad; the new system was about 1.8 per cent faster in our all-around system performance tool, Speedmark 5. Most tests, however, like Photoshop, iMovie and iTunes were all within a second or two of each other. We posted an analysis of the benchmarks earlier this week; check out the benchmark analysis of the 17-inch MacBook Pro for a more in-depth look at the performance results.

One thing we will point out is that the 17in MacBook Pro is priced at $2,799 in the US. Thanks to Sterling falling faster than a lead balloon tied to a brick the US price translates to £1,968 without tax. Include the VAT at 15 per cent in the UK and the actual price of this laptop should be £2,263.

We point this out not to raise the issue of Apple’s pricing again, or to defend the ongoing price rises, but as a buying suggestion. If you are considering one of these laptops, get it quickly. Because it is possible that Apple will put the price up again, possibly by another £200-£300.