The new Mac mini models provide the most significant upgrades to the line yet, offering slightly better CPU performance, considerably improved video capabilities, increased expandability, and better wireless technology. The result is that for the first time, the Mac mini is a computer that’s truly capable of handling the iLife suite. More than ever, it’s an appealing computer for those who already have a display, keyboard, and mouse, or those looking to build a Mac system on the smallest budget (or in the smallest space). It’s also a good upgrade for owners of the PowerPC and first-generation Intel Mac minis. On the other hand, if you purchased a Mac mini in 2007, the new models are compelling upgrades only for those who want to play games or perform other graphics-card-intensive tasks. Between the two models, it’s tough to justify the additional cost of the £649 mini. Those willing and able to perform their own upgrades should do so. Otherwise you should consider purchasing the £499 model with Apple’s 2GB RAM upgrade and then attaching an external drive; you’ll get more storage for your money, and if you go the FireWire route, you can actually get better performance than that of even the the £649 mini.

When we reviewed the previous Mac mini iteration, we lamented the 11 months it took Apple to release that update – a period so lengthy that many people wondered if Apple would discontinue the line. So you can imagine the speculation that’s occurred in the 19 months since.

Apple finally gave the company’s least-expensive computer another refresh, and that update brought the Mac mini line its most significant upgrades yet.

On the outside, the newest Mac mini models look all but identical to their predecessors, using the exact same aluminum-and-white, 6.5- by 6.5- by 2-inch enclosure. As with previous minis, the computer’s tiny shipping container hints at the lack of included peripherals: you provide the keyboard, mouse, and display.

The only items in the box other than the Mac mini itself are the power adapter and cable, a mini-DVI-to-DVI video adapter, software DVDs (for Mac OS X and iLife ‘09), and documentation. Missing this time around is an Apple Remote, now a £15 option.

Also gone is the previous model’s DVI video port, replaced by two video ports: a mini-DVI port (identical to the one found on older iMacs and Mac laptops) that uses an included adapter to connect to standard DVI displays, and a Mini DisplayPort connector like those found on the current MacBooks.

Why two video outputs? Given that the Mac mini is designed to be used with whatever display the owner has, Apple told Macworld that the company wanted to be as flexible as possible with display-connection options. But the added bonus here is that both connections can be used simultaneously thanks to the new mini’s improved graphics capabilities (more on that below).

You can attach two displays to the mini and use them in either mirrored or extended-desktop mode. Alternatively, with the help of the £68 Mini DisplayPort to Dual-Link DVI Adapter, you can now use the Mac mini with Apple’s 30-inch Cinema Display, making the mini the first desktop consumer Mac with such capability.

Remaining the same are the mini’s gigabit Ethernet port, the digital/analog audio input and output jacks, and the security lock slot.

In addition to more-powerful processing capabilities, the 9400M takes advantage of up to 128MB of the mini’s main memory when 1GB is installed, or up to 256MB if 2GB is installed. The older mini’s Intel GMA 950 maxed out at just 64MB.

The mini’s Intel Core 2 Duo processor is now a 2.0GHz Penryn chip with a faster system bus (1,066MHz versus 667MHz) on both models, with a 2.26GHz version available as a build-to-order option. The processor’s level-2 cache is 3MB, up from 2MB for the previous entry-level model but down from 4MB on the higher-end model. Memory is now 1,066MHz DDR SDRAM (also known as PC8500), with the £499 model getting 1GB and the £649 equipped with 2GB.

But perhaps the biggest improvement here is that both models can handle up to 4GB of RAM, with the 1GB model shipping with a single 1GB DIMM, leaving the other free for expansion. (On the previous minis, each slot was populated with a 512MB chip, forcing you to replace the stock RAM when upgrading.)

The Mac mini now has five USB 2.0 ports (lower right). To the left of the USB ports is the new Mini DisplayPort. Next to that is the mini-DVI port.

The £499 and £649 models sport 120GB and 320GB hard drives, respectively, both SATA. On the other hand, the drives are still 2.5-inch, 5,400 rpm laptop models; these drives help keep the mini’s energy use low, but their performance is poor relative to most desktop drives.

Both new minis also include a faster 8x dual-layer SuperDrive, and similar “bump” improvements are found in wireless capability: 802.11g has finally been replaced by 802.11n, and Bluetooth is now 2.1+EDR. (Interesting side note: A number of “takeaparts” around the Web have noted what appears to be unused eSATA circuitry inside the new Mac mini. Though not used in the current minis, this provides more support for the theory that Apple will eventually be adding eSATA ports to its computers.)

Finally, Apple is quick to tout the new Mac mini’s green credentials: The company claims the mini is the world’s most energy-efficient desktop computer, using less than 13 Watts of power at idle, 45 per cent less than the previous Mac mini.

In addition, the packaging, which is now based entirely on recycled paper, is 31 percent smaller than before, allowing the company to reduce its environmental impact by fitting twice as many boxes in shipping containers. If you’re into green computing, the mini’s got a lot going for it.

The Mac mini has never been about performance; rather, it’s an affordable computer with a good array of features in a tiny package. (Apple told us the mini is designed to be the most affordable way to get a computer with Mac OS X and iLife.)

The latest models don’t change that: While our benchmark testing shows a notable jump in Speedmark scores since the August 2007 Mac mini models, individual tasks that aren’t graphics-intensive show more modest gains. This makes sense, as the mini’s processor speed hasn’t increased at all for the £649 model, and by only 0.17GHz for the £499 mini.

Rather, most gains in non-graphics-intensive tasks are the result of newer processor architecture and faster bus and memory speeds. 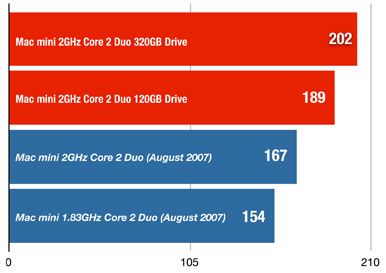 Larger gains over the previous models are found in tests of hard-drive performance. For example, in our Finder Unzip Archive test, which is largely dependent on the performance of the hard drive, the new models are 17 and 35 per cent faster than the previous top-of-the-line mini.

Interestingly, the difference in Finder performance between the two new models – the £649 mini is 22 per cent faster – is largely a result of the top-end mini’s hard drive outperforming the one in the £499 model. (Although both new minis use 5,400 rpm drives, there are other factors that affect drive speed. For example, the 120GB drive is a single-platter model, whereas the 320GB drive is a dual-platter.)

Still, it’s worth noting that the relatively slow laptop drives used in the mini line remain among its limiting factors compared to a traditional desktop Mac. In fact, when we ran the same Finder tests on the £499 Mac mini while booted from a FireWire 800 drive, the results were notably better than with either stock mini; for example, our Finder Unzip Archive test came in at just 1:01 (compared to 1:19 and 1:41 for the two minis booted from their stock drives).

It’s in the graphics department that the new models really shine – at least compared to older Mac minis. Thanks to the GeForce 9400M GPU, the new £649 mini’s performance (measured in frames per second) was seven times that of its predecessor in our Quake 4 test, 39.1 versus 5.6. Similarly, in our Unreal Tournament 2004 test, the new mini’s framerate (63.0) was nearly three times that of its predecessor’s (21.9).

Perhaps most telling, the new mini was able to generate 35.6 frames per second in Call of Duty 4; the previous mini couldn’t even run the game. (When equipped with comparable RAM [2GB] the £499 mini produced similar results; with the stock 1GB RAM, performance was reduced by roughly 17 per cent in the same tests.)

Benchmarks aside, the new mini is also a decent performer in real-world testing. I played the first few levels of Call of Duty 4 on the £649 mini, using the game’s automatically configured (“Optimal System Settings”) graphics settings. While those settings obviously provided lower-quality visuals than you’d get with the newest iMac or Mac Pro, and the frame rates wouldn’t satisfy hardcore gamers, the graphics looked good and the game was more than playable, bogging down a bit only in the heaviest firefights.

I also imported a number of 720p video clips into iMovie ‘09 and was able to use all of iMovie ‘09’s features with reasonable performance. Finally, I was able to run multiple Microsoft Office programs along with Safari without problems.

Which Mac mini to get?

Unfortunately, the £499 model’s paltry 1GB of RAM can hamper its performance considerably, even if you mainly use your computer for Web browsing, e-mail, and an office suite such as Microsoft Office or Apple’s iWork. (And the £499 model’s slower hard drive makes it that much more painful, compared to other desktop Macs, to get into heavy virtual-memory disk swapping.) Using iMovie, I was able to get similar performance to that of the £649 model only if I quit all other programs first. And Call of Duty 4’s overall performance was considerably degraded: the automatically-configured settings provided lower-quality video, and I experienced frustratingly frequent stutters and pauses.

While the Mac mini’s tiny size has many advantages over larger computers, this design also makes it the most difficult Mac to upgrade.

Unless you’re skilled with putty knives and spudgers, and comfortable forcing little plastic and metal pieces to do things they don’t appear to be willing to do, the mini isn’t a machine you’ll want to take apart. (Apple’s policy has always been that as long as you don’t break anything in the process, you’re free to upgrade your Mac mini yourself. The company confirmed to Macworld that this is still the case.)

And there’s the rub with the Mac mini: The otherwise-attractive £499 model offers a meager 1GB of RAM and only 160GB of hard-drive space – disappointing specs for a computer that’s more than capable of handling movie and photo editing using the included iLife suite.

Opting for the £649 model alleviates these issues to some degree, giving you 2GB of RAM and a 320GB hard drive, but these are its only improvements, and they’re ones that would cost you less than $100 if you installed them yourself. Yet by making the Mac mini so difficult to upgrade, Apple has ensured that many users will pay the £649 mini’s £150 premium.

Thankfully, Apple will upgrade the £499 mini to 2GB RAM for only £40, a fair price considering that Apple performs (and warrants) the installation. And the new mini’s plentiful expansion ports mean you can always add more external storage. In fact, as noted above, by adding (and booting from) an external FireWire drive, the £499 mini’s performance can surpass that of either stock model.

With 750GB and 1TB FireWire 800 drives available for under $150 these days, unless you’re using your mini in a location where you can’t have an external drive attached, you’ll get far more value for your money going this route.