It’s probably best not to think about the price when looking at a maxed-out system such as this. Clearly, with a price approaching the £5k mark, the 8-Core Mac Pro with a 2.93GHz CPU is a specialist system that’s beyond both the budget and means of mere mortals. Still, its Speedmark figures speak for themselves, and both data crunchers and 3D video professionals will find the speed increase represents value for money. Aside from that, as a pure object of lust it’s hard to beat. Meanwhile, back in the real world, the upgrade option for the single 2.93GHz Quad-Core Intel Xeon model is an interesting option that deserves closer inspection. The price to upgrade from the single 2.66GHz Quad-Core to a 2.93GHz Quad-Core is £400; and the upgrade from a stock Nvidia GT 120 to a ATI Radeon HD 4870 is a further £160; this takes the basic Quad-Core Mac Pro from £1,899 to £2,459. It’s certainly expensive, but still £40 less than the entry level 2.26GHz 8-Core Mac Pro (£2,499). But look at its Speedmark results: our souped-up Quad-Core has a SpeedMark result of 377; well above the 348 that the basic 8-Core system offers. Of course, a lot of this can be put down to the graphics card, and keen gamers would be fools to miss out on the ATI Radeon HD 4870 upgrade, no matter which system they get. Having said that, gamers should compare these systems with the high-end 24-inch iMac 3.06GHz with its Nvidia GeForce GT 130 (512MB) graphics card. It offers performance between the two for a slightly more reasonable price of £1,799. And, as we mentioned, OS X 10.6 Snow Leopard could change everything. But for the here and now, the Quad-Core with an upgrade certainly seems to offer better value for money than the 8-Core Mac Pro. But by heck that 8-Core Mac Pro’s fast.

Apple stole a march on other computer manufacturers with its latest range of Mac Pro computers, being the first company to include Intel’s Xeon 3500 and 5500 Quad Core processors.

Part of the ‘Nehalem’ family of chips, the new processors offer a number of advances over the old Intel Quad Core family. All four cores are now on a single die, ensuring all 8MB of L3 cache is available to any and all processing cores. On top of this the memory controller is now on-chip, facilitating access to the main memory, which eliminates latency by up to 40 per cent.

Nehalem also marked a return for Intel’s Hyper-Threading technology, which creates two virtual cores on each physical core (and consequently runs two processes on each core). And with up to eight cores available across the two Quad-Core CPUs that’s up to 16 processes running simultaneously.

The idea of using cores, rather than base speed, to measure performance is one that’s increasingly taking hold. This could be a real game-changer, if anybody knew how to program for it. However, most applications aren’t currently designed to take advantage of these separate cores; at least not until Snow Leopard comes along.

But even here the Mac Pro is no slouch. A custom, build-to-order option cranks the processor speed up to 2.93GHz, and the Nehalem processor features a technology called Turbo Boost. This technology spins down idle processing cores and increases the speed of the processors in use. Apple claims this enables a 2.93GHz Xeon to run at speeds as high as 3.33GHz.

Claims like that excite us here at Macworld. And there’s no denying that the new Mac Pro is a beautiful piece of kit, both inside and out; so we decided to put two of the fastest Mac Pros we could buy to the test.

Beauty and the beast With its four hard drive bays, two optical drive bays and four PCI Express 2.0 card slots, the Mac Pro is Apple’s most configurable Mac, and offers a host of different upgrades and options. Macworld Lab tested a couple of different Mac Pro configure-to-order (CTO) systems and the results include our first Speedmark 5 score to top 400.

To refresh your memory, the latest Mac Pros come in two standard configurations. The £1,899 Mac Pro features a 2.66GHz Quad-Core Xeon processor based on Intel’s Nehalem architecture. It has a 640GB hard drive, 3GB of 1066MHz DDR3 SDRAM, and an Nvidia GeForce GT 120 graphics card with 512MB of DDR3 memory.

The second standard configuration model is a £2,499 8-Core model that uses two Quad-Core Xeon processors running at 2.26GHz. It has twice the amount of SDRAM as the £1,899 Mac Pro, but uses the same Nvidia graphics card and hard drive.

Visual flair As we found in our recent gaming performance benchmarks, the ATI Radeon HD 4870 is a better performer than the Nvidia GeForce GT 120 graphics card in the standard configuration. High-resolution game tests showed the 2.93GHz Quad Core Mac Pro with its optional ATI card displaying more than twice the number of frames per second in our Quake 4 tests and nearly three times as many frames in our Call of Duty 4 tests.

The 8-Core 2.93GHz Mac Pro, which uses a pair of Quad-Core processors, was 17 per cent faster than the standard 2.26GHz 8-Core Mac Pro in our Speedmark tests, 16 per cent faster in our ProRes Compressor test and 23 per cent faster in Cinema 4D. Again, the custom system, with its speedy ATI Radeon HD 4870 graphics was considerably faster than the systems with standard GeForce GT120 graphics cards. Processor speeds weren’t much of a factor in our games test results. If you’re a hard-core 3D gamer, the £160 upgrade to the ATI Radeon HD 4870 seems like a no-brainer, though the stock Nvidia GeForce GT 120 graphics card is certainly no slouch.

As we saw in our review of the standard configuration Mac Pro models, in many cases, it is better to have fewer but faster processors rather than more cores running slower. But in the few applications that can take full advantage of multiple core, such as Compressor, Cinema 4D and Mathematica – the Quad-Core 2.93GHz was not as fast as the standard 8-Core 2.26GHz Mac Pro.

RAM raiding We ran a few tests with more RAM, but as our tests are run one at a time, there wasn’t much of an impact. The 8-Core 2.93GHz Mac Pro with 12GB of RAM scored a 407 in our Speedmark tests, just 5 points higher than the 402 score earned running the tests with 6GB.

It is also worth noting that the next iteration of the Mac operating system, OS X 10.6 Snow Leopard has several technologies (most notably one called Grand Central), designed to take full advantage of computers with multiple cores. This, in effect, will make it much easier for programmers to develop applications that perform faster on multi-core systems. Just how much advantage you’ll see initially on Snow Leopard, versus how much you’ll see in a few year’s time when programmers have coded applications specifically for the operating system remains to be seen. Only time will tell.

Whether it makes financial sense to invest in a single, uber-fast core, or get a system with multiple slower cores is – in this respect – a moving target; in some respects it may be wise to wait until Macworld has performance tested Snow Leopard before making such a big investment. 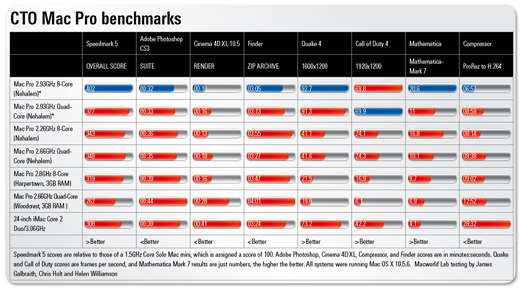