If you’re in the market for an affordable Mac laptop, the white MacBook (now the only MacBook) is still a good bargain. Although its price increase is regrettable, the performance gains make it even faster. While an argument surrounding Apple’s overall pricing structure, and whether £749 is an appropriate entry level price point in the current economic gloom, there’s no doubting that this model offers a tremendous amount of grunt for the money. With its impressive performance, battery life, the inclusion of FireWire 400, and more common mini-DVI connector, it offers a practical feature set. However, now that Apple has reduced the prices of its unibody MacBook Pro range, meaning consumers can now pick up a 13in MacBook Pro for just £150 more, it remains to be seen whether the deal is as good as it looks.

Apple’s original MacBook, also known as the white or polycarbonate MacBook, is something of a conundrum. On the one hand it’s easy to understand its appeal. As Apple’s cheapest laptop it has proved popular in the education market, and with consumers looking for a low-cost Mac laptop.

On the other hand it has clearly been superseded by Apple’s more technically modern, but more expensive, unibody MacBook (now known as the MacBook Pro). This newer model has an improved screen, and the multi-touch glass trackpad, not to mention the superb aluminium casing.

Yet it is this older, white MacBook that continues to enthral the public. We had expected the white MacBook to have a short shelf life after the more modern unibody aluminium versions appeared, but Apple seems to recognise that this model has an important role to play. Possibly because the credit crunch era requires a cheaper entry level Mac Experience.

Same, same but different While keeping the same white polycarbonate shell, Apple has quietly bumped the speed of the laptop’s Core 2 Duo processors from 2GHz to 2.13GHz and increased the hard drive capacity from 120GB to 160GB. The white MacBook now includes faster 800MHz DDR2 memory than its last iteration, which used 667MHz DDR2 RAM. These updates amount to not only a better performing entry level MacBook, but also a system that’s faster than the old 2GHz aluminium unibody MacBook.

There’s a catch though. While the price has stayed the same in the US, at $999, it has once again risen in the UK, this time from £719 to £749. This has followed a series of successive UK-based rises that have taken the price up from £704.

This continuing price hike has taken some of the shine off the MacBook here in the UK, while our US counterparts continuously praise the white MacBook for offering great power for the same reasonable price. Part of the reason for this is that our currency is being devalued, and £1 no longer gets you $2 (as it did this time last year), but roughly $1.62. This means the US price translates to £619, and once 15 per cent VAT is added to that you get £711.85. Apple has told us that it’s not just the exchange rate that’s to blame for the price differences on either side of the pond, but a number of local factors, including import taxes and the cost of doing business. However, at the end of the day you are paying more for this MacBook than you did a month ago.

Looking on the bright side, you do get considerable oomph for the extra cash. These updates to the white MacBook bring its specs up to the same level as the entry level MacBook Pro (with the exception of processor speed). Both systems have Core 2 Duo processors with 3MB of shared L2 cache. They both include 8x DVD-burning SuperDrives, 160GB hard drives, and 2GB of RAM. They both have glossy 13.3in LCD displays (a non-glare option is no longer available for the white MacBook) and both have 1066MHz system buses and use Nvidia GeForce 9400M graphics.

There are many differences too. The entry-level 13in MacBook Pro, costing just £150 more, features the unibody design, with an SD card slot, 2.26GHz processor, built-in seven-hour battery, mini DisplayPort connector, and 1066MHz DDR3 memory. The MacBook Pro also uses an LED backlight and has glass covering the display for an even glossier (some would say mirror-like) screen. The new white MacBook uses the older polycarbonate shell and the older mini-DVI port, but is the only current MacBook to include a FireWire 400 socket (although the MacBook Pro has a compatible FireWire 800 socket).

It’s worth noting that the unibody design does seem to be more durable over time. Although we didn’t see any problems during our short time with the white MacBook, potential buyers may want to consider some of the documented durability issues reported by users of the polycarbonate model. Notably, claims that cracks have appeared in the casing.

The better screen quality of the LED backlit display found on the aluminium MacBook shouldn’t be dismissed either. There’s really no way to put this into words, so a visit to the Apple Store and comparing the two screen side by side may convince you of its worth. Likewise, the usability of the multi-touch glass trackpad is an intangible asset, but owners of these multi-touch enabled MacBooks often swear that they could never return to the older trackpad model.

The new white MacBook was a little more than 4 per cent faster than the 2GHz aluminium MacBook when tested using Speedmark, and proved to be faster at nearly every task, despite costing £180 less (note that we have not yet tested the new 13in MacBook Pro). 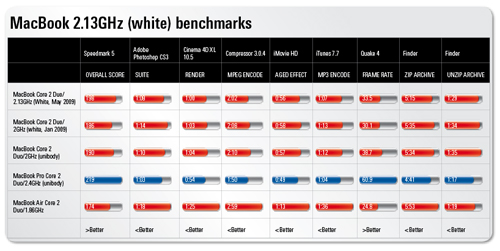