The COOL-ER Reader is a good, if not perfect, electronic reader. It can store a large quantity of books and read a wide variety of formats. And Interead has wisely hooked up with Adobe Digital Editions to bring an official bookstore capacity to the device. We have concerns over the build quality though, and Interead would do well to source some better quality components and thicker plastic. We’d also like it to eject properly from the Mac desktop and we just feel these devices are too expensive in the mass market (although that applies to all electronic book readers). But it’s a competent product for reading books.

Interead’s COOL-ER Reader is an interesting device that’s stylish and practical and offers a wide range of support for both open and DRM (digital rights managed) books.

“It’s about more than just a tech reader,” Phil Wood, Interead’s Marketing Director told us “It’s about making reading cool. It’s a product that a kid can use without being made fun of for reading a book”

Shall we tactfully say that the design nods towards that of a famous music player? Indeed, many people have asked us if it is a new iPod – perhaps a comically large one. This is in itself no bad thing (albeit a tad shameless) but when you start to use the device it’s clear that this isn’t an Apple production. 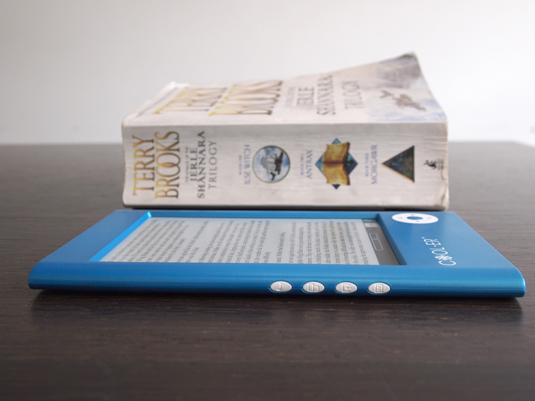 The COOL-ER Reader next to a traditional paperback novel

The wheel on the lower right is not a scroll-wheel. Instead it is the more traditional up, down, left, and right variety. A central button acts to select options and on the left side is a back button (along with buttons to rotate the screen, access menus, and a quick access button to music). On the right hand side of the device are volume control rand on the top is an On/Off button and an SD Card socket.

We found its practice of switching off (versus having a lock button) odd on a device that doesn’t use power when in use. On the upside it has enough power for 8,000 page turns on a single charge, more than enough to keep you going through several books.

We found the SD socket largely superfluous. The device comes with 1GB of memory and with the average book taking up less than 1MB of space you can easily fit roughly 1,000 books on the device. Not that we managed to get anywhere near that amount on it for testing.

Interead have cleverly hooked up the COOL-ER Reader with Adobe Digital Editions. This Adobe software enables you to import books, browse them and transfer them to the COOL-ER Reader in a style reminiscent of an extremely basic iTunes. Files are transferred via a regular USB cable connection, and it is possible to transfer files directly to the Cooler volume, although doing so will result in the Mac OS X finder hidden files being transferred (those are the ones that begin with a ‘.’) so you end up with duplicate files on the Reader. If you use Adobe Digital Editions you get a clean transfer with no duplicate files, plus you get a handy management software. One caveat, at the time of going to press Adobe Digital Editions doesn’t install on Mac OS X 10.6 Snow Leopard, although we expect Adobe to roll out an update fairly quickly. 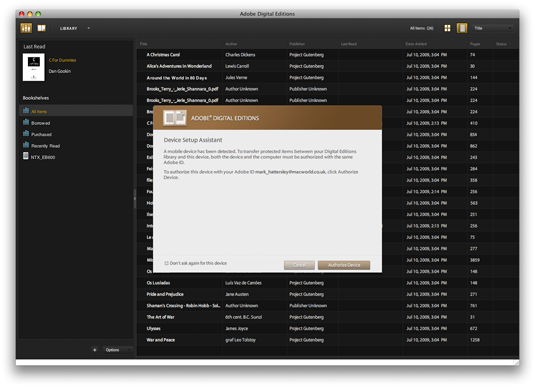 Adobe Digital Editions enables you to manage devices and your book library. It also acts as a DRM gateway for legitimately purchased books

As with the BeBook eReader we found the volume didn’t like ejecting on the Mac. Dragging the COOl-ER Reader volume to the Eject bin immediately remounts the volume. And if you unplug the device without ejecting first you get the usual Mac OS X warning about potential lost data. There is a way around this: launch Disk Utility and highlight the volume, then click on the Unmount button instead of Eject.

We only know this approach because the BeBook reader suffered the same problem, and it’s a pretty obscure solution. It did make us scratch our heads at the official Mac logo on the box though. At the very least some documentation outlining the process on the Mac should be included.

So there are some technical gripes, but on the upside it supports a wide variety of formats including PDF, EPUB, FB2, RTF, TXT, HTML, PRC, JPG (and MP3 for music). The Microsoft Word .doc format isn’t listed, but we found it worked when we imported Word documents. However, the newer .docx format from Word 2008 isn’t support (which is presumably why Word isn’t listed as a supported format). It doesn’t support the Microsoft .Lit format, although we’ve found this format clunky on other readers and would advise you to skip it in general.

Unlike some other electronic readers we found it had little to no difficult with any of the supported formats, and is as a good at PDF and HTML as plain text (some low powered readers such as the BeBook struggled with complex PDFs). The COOL-ER Reader packs a Samsung Arm 9 400MHz processor and makes short shift of flicking between pages.

The processor’s not the only decent spec on the device either. It has a 6in screen with 170dpi and 8 levels of grayscale (versus the Kindle’s 6 levels).

Most of the books you download from services such as Project Guttenberg are in the DRM-free PDF, TXT, or RTF formats – which we found perfectly acceptable on the COOL-ER Reader.

One word of warning is that fiction novels, or long streams of text, work much better than the large-format computer books. The way the text wrap works made following a book on programming nigh-on impossible on the 6in screen.

On the purchasing front you get the EPUB format complete with DRM technology. Your COOL-ER Reader has to be authorised through Adobe Digital Editions but then you’ll be able to buy the latest books from a variety of sites. Interead has set up a site called CoolerBooks with 300,000 novels for sale, which sounds a lot but there’s a lot of gaps there. We found Waterstone’s service (www.waterstones.com) to be slightly cheaper, but the joy of the COOL-ER Reader is that you can always buy the books from Waterstones and import them.

We do have an issue with the build quality of the COOL*ER Reader though. The plastic feels thin and flimsy and the device makes a notable creak if you gently bend it. And one of the screws fell out after a few weeks usage. The layout of the buttons isn’t massively user-friendly and

Then there’s the issue of the price. At £179 the COOL-ER Reader is by no means overpriced for the market. The original Sony PRC500 reader was £20 more expensive, and its replacement – the touchscreen PRC-600 – is an uncomfortable £249. The BeBook is £229 and even the budget Sony PRC-300 is £179 despite having a much smaller screen.

So the COOL-ER Reader does have an edge on price, we’re just not sure if it’s enough of a one to make up for the build quality and to reach its target market. It’s still an expensive way to go about reading paperback novels, and is £179 really appropriate for a device aimed at a younger audience? Maybe it’s beyond the realms of possibility for the time being, but this device would feel much more appropriate if you knocked a good £100 off the ticket price.