Doodle Bomb: Physics Puzzle with a Bang is a quality puzzle game that both entertains and maintains its attraction over extended and repeated play. While the gameplay might seem repetitive at first, the sheer fun, challenge and quirky graphics have lasting appeal. There’s also plenty to suggest developers Bottle Rocket have several cool updates to come to keep the game fresh and energised.

Doodle Bomb: Physics Puzzle with a Bang from iPhone developer Bottle Rocket is one of the few puzzle games we’ve played that gets better the more time you invest in playing it. Addictive, the game is perfectly balanced between too easy and too hard, slowly building momentum and ensuring extended hours of challenging fun with some excellent responsive controls.

Doodle Bomb currently – and new levels are being added regularly – revolves around 65 levels or missions, 25 of which are deemed ‘Master Missions,’ with one aim, to be ‘Bomb Master.’ Real physics help drive your efforts to take aim and progress to the next level, one step closer to your goal. Achieving that mission goal requires strategy, timing, precise placement of bombs and a fair amount of trial and error and practice to gets right.

The latest update adds 10 new Master and 5 new Standard missions, and several additions and enhancements are in the works, including a new scoring system, OpenFeint leader boards, achievements and social networking integration. Currently, new anti-gravity controls, introduced with the 1.2 update, allows players to toggle gravity between upwards and downwards force. The feature sometimes requires the player to reverse gravity, roll bombs on ceilings into position, then carefully time another gravity switch to drop the bomb into a hard to reach location to advance. 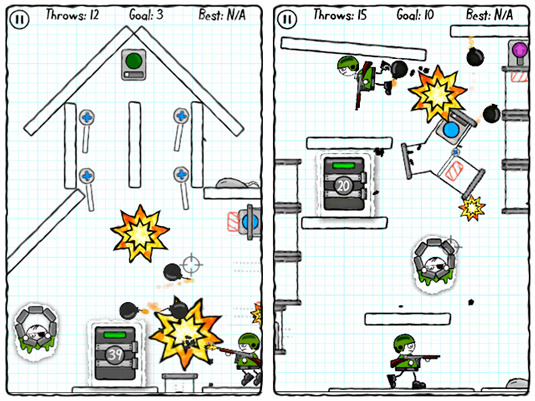 Variable bomb tilt meanwhile, allows players to ‘roll’ close to objects by tilting the iPhone left or right. This can be useful to precisely align a bomb, or burn a fuse while waiting for a timed event to occur. In version 1.0 the amount of roll was constant when the tilt reached a specific degree. In this latest version the tilt is variable so the speed gradually increases the more you tilt, helping to enhance the hands on feeling of the subtle controls.

Doodle Bomb is built around some deceptively simple graphics, which as the name suggests resemble doodles ripped from a notepad or sketchbook. These are both easy on the eye on the diminutive screen and quirky enough to appeal to anyone looking for something a little different, although the game does share some visual elements found in the best selling Doodle Jump for iPhone.