We favour the iPad 3G over the regular iPad WiFi, and find the persistent data connection a must-have for true portability, because so much of the device’s usage is dependent on the Internet. The iPad itself is a truly great product, and although we’re sure the second-generation will add some features that are obviously missing, we think it’d be a shame to miss-out on the launch of the most exciting computing device in years. So if you haven’t done so already, we advise you to go out and get one.

Surely by now there’s can’t be anybody on earth left that hasn’t heard of the iPad? We’re going to assume that you know pretty much all about it by now, so this test won’t really about the iPad itself, but the iPad on a 3G network in the UK.

First of all, forget anybody who tells you the iPad is just a ‘giant iPhone’, because it’s an idiotic statement that misses the point. The iPad is a rethinking of what a computer-based device is for, and how we go about performing computing tasks. The key here is what Steve Jobs said “[the iPad] has to be far better at some key tasks … browsing the Web … e-Mail … photographs, watching videos, playing games”

It’s important to note that the iPad is not designed to, nor is it capable of, completely replacing your desktop or laptop computer. Not least of which because – like the iPhone or iPod touch – the first thing you need to do is connect it to a computer and fire up iTunes to activate, setup, and sync the iPad with your media collection; you will also need to use iTunes to update the system software and restore the iPad should any problems arise. So you still need a computer.

People who bemoan (and weirdly there seem to be plenty of them) the lack of this, or that, function on the iPad (whether it be SD Card slots, USB Ports, Adobe Flash support) are also missing the point. The iPad is better than a laptop at those key tasks because it lacks other features; it lacks the clutter of Mac OS X, the keyboard, the mouse, the hardware sockets and above all the unused applications, utilities, and system preferences that cram a modern operating system and steal parts of your life moment by moment as you spend time fixing things, rather than doing things.

By ejecting much of the clutter, Apple has enabled both the device, and you, to focus on what it does well, those key tasks that Steve Jobs talked about. And like the proverbial girl from the nursery rhyme, when it’s good it’s very, very good.

Surfing the web on an iPad is an absolute joy, as is watching videos, sharing photographs, and all those “key tasks” that Steve Jobs talked about. And of course, there’s Apple famous App Store with thousands of great apps. As you’d imagine some make more of the iPad’s large screen estate than others, but the ones that do (such as The Elements, The Guardian EyeWitness, and Magic Piano, and so on) each offer a fantastic, and in some cases completely unique, experience.

The display, the same type of high-quality LED display found on iMacs and MacBooks deserves special mention. The vibrancy and quality produced by this piece of hardware is superb.

There are some technical innovations above and beyond the iPhone. The multi-touch display can handle up to all 10 fingers at once (tested with Pianist Pro) and the A4 processor is a vast improvement on the chip in the iPhone 3GS, both in terms of actual speed and energy performance. Battery life deserves a mention all of its own – being measured in days rather than hours. We tested the iPad extensively and got 11 hours and 15 minutes from pure video playback; Macworld Senior Editor Christopher Breen tested audio playback and after 43 hours of constant playing (and still having 71 per cent of the battery left) he abandoned the test. In regular usage we find ourselves having to charge it up every three or four days.

That’s not to say that the iPad is perfect; this is still a first-gen product and we can certainly think of ways to improve it. Some form of multi-tasking, due later in the year, will be welcome; as would the ability to run multiple user accounts. We’re sure that software updates will introduce these, and other, new features over the next few years.

There are also things that we’d like to see in the hardware: a built in SD-Card reader and the FaceTime camera from the iPhone 4 are both likely to be included in future iterations.

And, of course, it’s clearly less capable than a MacBook in many ways. Sooner or later you will attempt to do something, upload images to an online website for example, and find that this a task the iPad simply can’t do (in this case because the image uploader is most likely designed to integrate with files from a Desktop, not the Photo app in an iPad).

But consider some of other things it lacks: viruses, malware, complex installation processes, software errors, backup requirements, complicated network setup… the list of all the tedious computing requirements that form part of daily life that have been yanked out of the iPad makes it completely refreshing. Let’s put it this way: every bank should be getting its customers away from online banking and towards iPad and iPhone apps as soon as possible.

Ultimately, the iPad is a device that is superb for consuming content, but not as good as a Mac for creating it. The experience of reading a book, graphic novel or – increasingly – a virtual newspaper, or watching a video, showing off photographs, or just flicking around the Web and checking your email is an utter joy. We can’t overstate how great it is to do all these things on a handheld touch-screen device with a big LED display.

And the nature of some content just feels completely fresh and different. The newspaper apps, such as The Financial Times or the New York Times for example, have a different pace to websites, offering a more traditional sit-back-and-read approach that is sorely missing in the online race to churn out news quickly. And although it’s hard to read a book without getting distracted, we’re increasingly finding ourselves settling down with iBooks or Good Reader.

Working, however, isn’t quite so much fun. Typing on the virtual keyboard, although practical, becomes a chore for anything longer than a quick email; and we found using all three iWork apps: Pages, Numbers, and Keynote to be quirky and difficult each in its own way.

Whether or not the iPad can replace your iPhone is also another matter, you will still need (we presume) to make phone calls and send texts, neither of which is possible on the iPad. Not that we think the lack of phone functionality is a problem, after all you don’t want to look like Dom Joly, but it does mean that the gap between a iPad WiFi and the iPad 3G is fairly narrow. Aside from the constant data connection, the only other technical advantage the 3G version has is built-in GPS, and although it makes Maps more accurate, and ensures that you can use any of the upcoming Sat-Nav apps on the iPad, it’s hardly a killer feature.

Persistent data, however, is something you might want to consider. Increasingly we are turning to the iPad over the iPhone on our daily commute, and longer journeys, not to mention times when we simply want to get online wherever we are.

Unlike the iPhone, the iPad 3G is sold contract-free and you purchase a Micro-SIM card to go with it (20p each). Four carriers are currently offering iPad Micro-SIM cards: Orange, O2, Vodafone, and Three. Three offers the best deal for monthly packages, although O2 has a daily package that can be activated from within the iPad itself, which is good for sporadic use. O2 also offers access to The Cloud and BT Openzone. Orange matches the O2 deal but only has access to BT Openzone, although it has arguably a better network. Lastly is Vodafone, after initially getting its pricing seriously wrong (basically offering far less than everyone else and asking for more money Vodafone now matches both O2 and Orange, although there’s no access to WiFi networks.

Most of our test has been performed with the Three network, which claims to offer the best reception in the UK (when out of Three reception it roams onto the Orange network). Orange itself offers a comprehensive network, as does Vodafone (at least according to Ofcom) with O2 bringing up the rear. We managed to get a healthy 1.2MB download speed, and 281Kbps upload in the office, certainly fast enough to power mobile web. In fact, remain pleasantly surprised at the speed of mobile web browsing, which we assumed would be significantly slower than accessing sites optimized for mobile. 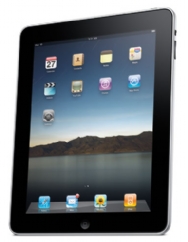 It’s slightly disappointing that all contracts have moved away from all-you-can-eat unlimited plans, to data charging. Your usage can vary, but if you’re just using it for downloading news, emails, web pages, and so on, you’re unlikely to break 1GB in a month (according to our cellular data network settings we used 11.5MB SENT and 64.9MB RECIEVED in a week). If you use YouTube and Spotify, plus download Podcasts via the 3G connection, usage will raise exponentially.

On the whole, however, we value the ability to use the iPad on the move, especially during the morning commute to work (at least now that the fear of being robbed or mobbed has passed). The addition of 3G built-in to the device is and the comprehensive portability it gives the device is, to our minds, well worth the extra £100 and £10 per month data charge. Your experience may vary and if you don’t envisage yourself passing an hour on the train every morning, then the WiFi version may well be more suitable for you – it’s certainly the best way to experience mobile computing.

On thing we should note is the availability of portable WiFi dongles, known as MiFi, these feature a SIM card and produce a small WiFi network that you carry around with you. These are available from several cell phone providers and we recently tested out the Three MiFi with pretty good results. This is a good way to get 3G networking on an iPad WiFi, and

The iPad is a whole new product (or at least it would have been if it hadn’t taken three months after the US launch to come out in the UK). Although at £529 and upwards for the iPad 3G it can hardly be considered a impulse purchase, there’s no doubting its worth; like the iPhone the iPad has seamlessly integrated itself into our lives, and we use it daily. And if that’s not worth the money, we don’t know what is.