The new 17in MacBook Pro offers better performance and a little more battery life. The smaller, lighter 15in 2.66GHz Core i7 MacBook Pro costs less and performs better, but it you want a larger screen or need an ExpressCard/34 slot, the 17in is the only member of the MacBook line to offer such features. For mobile Mac users who favour larger laptops, this model is a definite improvement over previous 17in offerings.

Apple offers a few options for customising the 17in MacBook Pro. For more processing power, a 2.66GHz Intel Core i7 is available for an additional £160. Doubling the RAM to 8GB will cost an extra £320, and faster drives, including solid-state drives, are also available. For those bothered by the stock glossy display, an anti-glare screen costs an extra £40.

The new system made its biggest gains in processor-intensive tasks like Cinebench, where it was 22 per cent faster than the previous 17in offering, and MathematicaMark 7, where the new model beat the older system by 30 per cent. 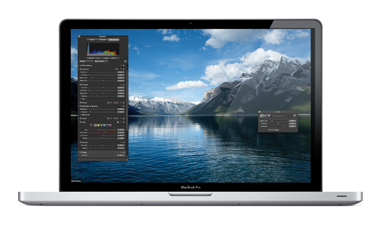 Aside from the screen size and an extra 256MB of graphics memory, the new 17in MacBook Pro shares nearly all of the specifications of the £1,649 15in MacBook Pro. It’s no surprise, then, to see that the two models performed very similarly – in fact, results were within 1 or 2 seconds of each other in more than half of the tests.

A comparison of the new Core i5 17in MacBook Pro and the 2.66GHz Core i5 iMac shows the lingering performance penalty to be paid for choosing a portable over a desktop. The portables use slower spinning hard drives and dual-core mobile versions of the Core i5 and i7, while the iMacs use quad-core desktop versions.

Both the desktop and mobile processors offer Turbo Boost, which allows the processor to speed up for a short period of time or to shut down unused cores and give extra resources to the cores in use. For example, Turbo Boost can increase the clock speed of the 2.53GHz Core i5 processor up to 3.07GHz.