After Effects CS5 is a much-needed and critical upgrade for speed and productivity in a 64-bit workflow. The Roto Brush is handy once you get the hang of it, and the added plug-ins offer advanced capability within the program. Keep your CS4 version, though, for updating old projects and to use with 32-bit plug-ins.

After Effects CS5 is Adobe’s powerful motion graphics software for designers and visual effects artists. The program is one of three in the new version of Adobe’s Creative Suite to go 64-bit native, taking full advantage of the multi-core processors and expanded RAM capacity of the newest Macs.

The new version introduces some high-end features: the Roto Brush tool lets you easily isolate foreground elements in complex scenes. It also offers native support for the new AVC-Intra 50 and AVC-Intra 100 codecs, as well as expanded native support for RED camera footage. An auto-keyframe mode, support for custom colour look-up tables, and an updated version of Color Finesse 3 LE colour correction tool are included, as is the Digieffects FreeForm plug-in.

One caveat: you will need to upgrade all of your third-party plug-ins to 64-bit versions, which will be an extra expense – and that’s assuming the plug-in manufacturer has a 64-bit version available. After Effects is also not backward compatible with older versions, so it’s a good idea to keep your copy of After Effects CS4 installed so you can work on existing projects and access your 32-bit plug-ins.

Brush up The most publicised new feature in After Effects CS5 is the Roto Brush tool. At first glance, it appears similar in function to the old Photoshop Extract plug-in, but it works very differently, since it spans several frames of footage at a time. You start by selecting the foreground object with broad strokes of the green brush, then reduce the brush size to pick up stray elements such as edge highlights, hair, and so on. Then use the red brush to identify the background. 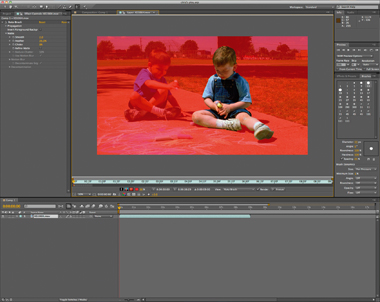 When you first apply the Roto Brush tool to a footage sequence, it creates a keyframe point and then looks for edges and changes across several frames forward and backward from the point at which you apply it. You can make adjustments on each frame as needed, but mastering this workflow takes time and practice.

The new Refine Matte effect, which is also applied when you use the Roto Brush tool, can be used with any matte layer as a standalone effect. It affects edge smoothness, feathering, chatter, and even motion blur, which is critical when matting people and objects when they’re moving. The Roto Brush is a fantastic technology and works best with a high contrast between foreground and background, but don’t expect the same quality matte results that you would get from shooting against a greenscreen.

You can bring in Repoussé 3D objects from Photoshop CS5, but as with all imported 3D objects from Photoshop, there is no real 3D interaction with After Effects lights or other 3D layers. All of the lights on the objects must be applied in Photoshop and remain static on the surface of the object, regardless of how you place this 3D layer in your After Effects scene. This is an area Adobe needs to focus on in future versions.