The Mercury Playback Engine is an amazing leap in technology, though only accessible to those with powerful workstations and CUDA cards. There’s enough here to interest those less fortunate, however, with extended format support and metadata enhancements, the bundled applications and, of course, 64-bit support.

Adobe is aiming high with the newly native 64-bit Premiere CS5, offering a range of cutting-edge features for the professional video market. First among these is the GPU-accelerated Adobe Mercury Playback Engine (MPE). This allows you to open and work with HD and higher-resolution sequences in real time, enjoy smooth scrubbing and play back complex projects without rendering.

One downside is that MPE can only run on Adobe-certified Nvidia CUDA graphics cards; another is that GPU acceleration is only supported on Snow Leopard. We tested this facility on a suitably souped-up machine and the effects were impressive, with speedy application of multiple effects like colour corrections, Gaussian Blur and blend modes, plus scrubbing through footage with no performance degradation.

Given the very high standard of kit used in professional editing, this feature will win many admirers, but if your Mac doesn’t quite make the grade, MPE can adjust the playback resolution of your video in the Source Monitor or Program Monitor. With high-resolution footage such as RED 4K, you can set playback resolution from 1/2 to 1/16 for smooth viewing. Setting Pause resolution to Full lets you quickly check the quality of focus or edge details – particularly useful when you don’t have the luxury of an on-set HD monitor.

New formats Also new in Premiere Pro is native support for file-based video formats such as Sony XDCAM HD 50, Panasonic AVCCAM and AVC-Intra, as well as DPX file import/export for editing with 10-bit, uncompressed digital intermediate files. DPX export lets you output 4K content directly from Premiere Pro without having to go through After Effects. Native support for RED R3D files has also been enhanced, with a new Source Settings dialog box offering non-destructive adjustment and control over the look of RED Raw footage. 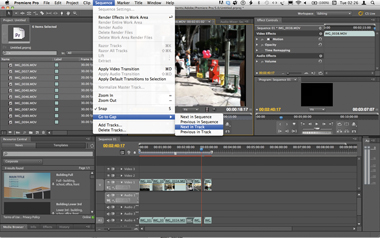 Native support for video shot with Canon, Nikon, and other DSLR cameras has also been added, so that you can take advantage of full-frame 1,920 x 1,080 or 1,280 x 720 HD video shot on standard 35mm lenses. Premiere Pro also continues support for variants of Panasonic P2, Sony XDCAM, XDCAM EX, and XDCAM HD, HDV and AVCHD. And Premiere still lets you combine a wide range of sources with different resolutions, frame rates, and aspect ratios in a single sequence without complex format conversions. For example, if you drop a RED R3D clip into an HD sequence, the clip will be automatically cropped to the HD frame size.

The new Go To Gap command also helps make editing more productive, as it can quickly find and remove gaps of at least one frame long on a single video track or on all the video tracks in a sequence. Two new keyboard shortcuts let you extend the length of clips on a timeline to the current position of the Current Time Indicator, which is useful for filling gaps before or after edits in the timeline.

Interoperability between Premiere Pro, Final Cut Pro and Avid Media Composer means that not only can you import, convert and edit files from these applications, you can also send them to After Effects or Encore via Dynamic Link, and export your projects as a Final Cut Pro XML file or AAF/OMF files for use in Avid editing software.