One of the best games we’ve played so far this year. An utterly serene, yet fiendishly complicated game that deserves a place in every iPad owners collection.

Osmos for iPad is a rare beast indeed. A wonderful game that looks fantastic, offers a new take on gameplay, and is so well suited to the iPads large capactive touch-screen that it’s hard to believe it was ever intended for any other system.

So it comes as a surprise to find that Osmos for iPad was originally a highly regarded Windows PC game that’s part of a genre known as “ambient gaming”. This sort of game offers a tranquilizing experience with trippy visuals and music that forms an integral part of the game.

In this case you play a pulsating ball of light. Tapping around your ball emits a small pellet of light and pushes you in that direction. The more you tap to move the smaller your ball gets (as you push out light). Balls of light smaller than you (coloured blue) will be absorbed into your ball making it bigger.

Larger balls of light than you (coloured red) absorb light from you. The aim is typically to work your way up the light food chain by tapping around a level.

So far, so simple. But it’s a engaging experience like no other. At times simple enough to tap around; other levels are fiendishly complicated.

Different balls of light act differently. Some just float around, others are sentient like you (hunting around), some repel balls; others act like large planets upon which everything gravitates. There are also anti-matter balls that absorb your energy while dissipating themselves. 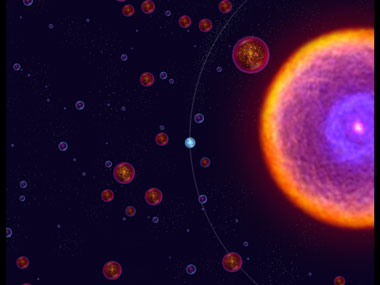 The music, created by a range of  musicians (Loscil, High Skies, Julien Neto, Gas and Biosphere) fits perfectly with the gameplay.

What was originally an intriguing PC game has taken a whole new life on the iPad. The touch screen fits the gameplay perfectly, much better than a mouse ever would. In fact the only single thing we can think to improve it would be online gaming where you can pit your wits against other live players.