The bling look may be off-putting to some, but if you don’t mind glamming up on your commute to work, the Remix Remote will do you proud. The sound is massive, with corking bass and a lovely clear overall reproduction.

V-Moda tends to veer on the glamorous side of iPhone accessories, and its new range of headphones is no exception. The Remix Remote are shiny in the extreme, but they are at least a little more understated than some of the more garish examples of bling-tech.

Along with the visual extravagance, the Remix Remote have also been built very well. The earpieces are sturdy without being heavy, and the cabling is strong too. Ergonomically, V-Moda has done a good job – the inline remote control has volume controls and a play/pause button that doubles up to support track skipping and scanning using double and triple clicks. There’s also a mic on the remote control unit, so you can make and take calls on the headset. 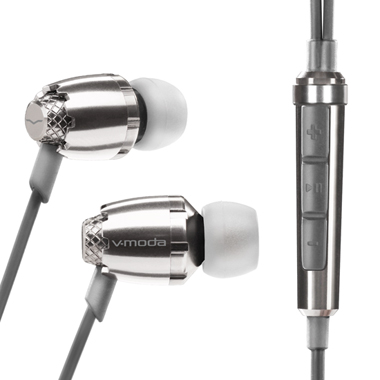 Given the bling look, you’d expect the bass to be strong, and you won’t be disappointed if kicking dance music is your thing. Bass is huge, without ever distorting or losing definition.

But the V-Moda offer more than just kicking bass to dance fans – the Remix Remote sound brilliantly rich on most kinds of music, and the overall sound is really punchy.

If we’re nit-picking, we’d say that sometimes the lead treble lines in songs dip out of the mix slightly, but the sound is clear even when you’re listening to very busy music.