A real problem for 2D platform games is the feeling that you’re on rails. That there’s only ever one direction to go and that’s from left to right. Braid, on the other hand, feels non-linear – and that makes all the difference to your expectations and enjoyment. Add in some fiendishly designed levels, a lot of old-school gaming and a genuinely great soundtrack, and you have a real winner to play through.

Savvy gamers know that the independent scene is the best place to go for thrills of a more cerebral stripe. Braid is a product of that scene and a deserving winner of multiple awards.

Fire it up for the first time and you might be forgiven for thinking you’ve just spent your hard earned cash on a late 90s puzzle and platform game. Your first instructions are to traverse the world, jumping and running like Mario, dispatching monsters by jumping on their heads and collecting puzzle pieces. 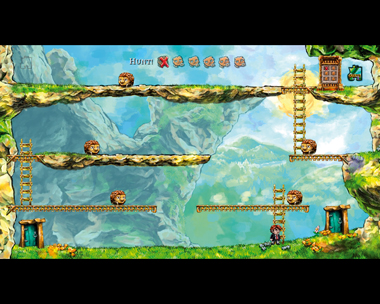 Take a second look. The artwork’s more subtle and refined. The platform puzzles cleverly lead you through the basic moves needed to navigate the world a set-piece at a time. And then you’re introduced to Braid’s killer feature. You can turn back time.

Players of the PC Prince of Persia sequel The Sands of Time (or even viewers of the recent movie adaptation) may not be unfamiliar with the concept. But Braid takes rewinding the action a step further. As you progress, you realise that it’s a crucial part of the game’s mechanics. There are sections you can’t complete without winding back the action. In fact, there are entire levels that can’t be finished until you’ve completed other tasks, further down the line.