If you’re a fan of strategy games then StarCraft II is a must-have purchase. It’s a bit pricey at £44.99, but the single-player campaign is enormous fun, while the additional online multiplayer options will keep you busy for months, ensuring that this is one game that’s worth every penny.

The arrival of StarCraft II has been lauded as though it heralded a new age for computer gaming. In truth, this sequel to the decade-old StarCraft is actually a fairly conventional real-time strategy (RTS) game. However, it’s taken the traditional RTS format and polished it almost to perfection.

StarCraft II follows on four years after the end of the original StarCraft. You play Jim Raynor, a rebel leader fighting against the repressive Dominion that rules human society. Matters are complicated by the creepy alien Zerg Swarm that wants to conquer humanity, and another alien race called the Protoss. 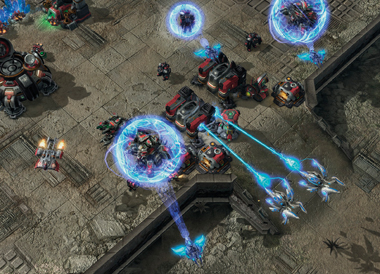 The first few missions in the game act as a warm-up for the main action, pitting Raynor and his rebel forces against the Dominion. But then, in the middle of one mission, you find yourself attacked by the Zerg and all hell breaks loose as the Zerg launch an all-out attack on humanity.

In many ways, this is all fairly routine stuff for an RTS – you wage war by harvesting minerals, which you then use to build bases, train troops and develop new weapons and technologies. However, the missions are varied and interesting, and carefully paced to provide a real challenge. One mission requires you to defend a base from the Zerg for about 20 minutes until a troop carrier arrives to whisk you to safety. Things start slowly enough, allowing you to fight off a few simple forays from the Zerg, but then mount to a non-stop frenzy that leaves you fighting for your life as you watch the clock ticking down one second at a time. There are also a few new elements that add a bit of spice, such as the ability to wander around your flagship and chat to other crew members about weapons upgrades and the available missions.