If you have a Multi-Touch Mac or trackpad, Raskin will be a dream to use. If you’re a mouse user, it’ll be fun for a while but frustrating at times. Ultimately, it’s a great tool waiting for technology to catch up.

The interface metaphors we use, both on Mac and Windows systems, are older than either Apple or Microsoft. The origins of the windowed operating system, icons and graphical menus date back to work pioneered by Xerox in the early 70s.

Raskin aims to move us on from some of those 40-year-old metaphors, while enhancing the best of traditional tools for new technologies. It does so by partially replacing the Finder on your Mac, with a visual representation of your file system that you can pan and zoom. Named after the late Jef Raskin, the interface guru who came up with many of Apple’s HCI (human-computer interaction) innovations, Raskin is progressive and intuitive, incorporating interface ideas that Jef designed for his ZUI (Zoomable User Interface) concept. 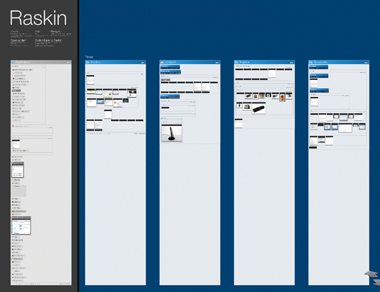 Raskin lays out your file system in a series of columns. Contained within are all folders, applications and files ordered by how frequently accessed they are. Zoom in to a file and OS X’s Quick Look feature comes into its own in a way it never has in the Finder. Text files are readable directly from the interface; media files are playable.

On a MacBook with Multi-Touch or a Mac using a Magic Trackpad, it’s very intuitive and impressive – a step towards the kind of interfaces seen in movies like Minority Report and Iron Man. However, it’s not quite fluid enough yet to ditch Finder all together. With a mouse and keyboard, you can get lost among your files. There are keyboard shortcuts to get you out of trouble, sure. But dragging and zooming with key combinations is more cumbersome than the Finder. And that’s not Raskin’s ultimate aim.

Like many innovative tools, Raskin feels a little before its time. If you’ve used an iPad, or even an iPhone, you’ll recognise some of the features here – but you’ll discover several more that you’ll want on all your Apple devices.