A great idea that has been flawlessly executed: the Mobee Magic Charger enhances a Magic Mouse, and turns it into a inductive charging wireless device, without changing the look, feel, or function of the original. One of the best Mac accessories we’ve seen all year.

Few devices have raised as much interest in the Macworld office as Mobee’s Magic Charger. This device is an extremely clever addition to Apple’s Magic Mouse that replaces the internal batteries (and bottom cover) of the mouse with an internal rechargeable battery and induction charging reciever.

The other part of the Mobee Magic Charger (the part that does the charging) is a flat plate that you place the Magic Mouse on. This uses inductive charging technology, where you can pass a charge from one device to another without physically connecting them (the charge passes from the plate directly into the mouse). 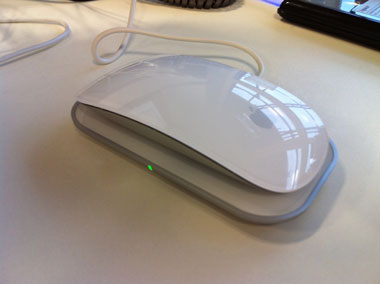 Above all though it turns the Magic Mouse into something more than Apple originally created, adding all the benefits of a wireless mouse without – something that’s always important to Apple fans – changing the look of the Magic Mouse one jot.

The only discernible difference is that with the Mobee Magic Charger installed the Magic Mouse becomes ever so slightly lighter than before; weighing in at 91grams instead of 107 grams with two Duracell batteries installed.

In terms of battery life it lasts a day, but little more. According to Mac OS X the device was delivered with a 40 per cent charge and it ran from 10:20am to 3:24pm. We then charged it up overnight and it ran all day from 9:30am to 6:38pm. Oddly though Mac OS X never reported the mouse as being over 78% full, no matter how long we left it on charge.

So a full charge pretty much lasts a working day (though no longer). We imagine that users are typically supposed to use it like that – the idea is that you place it back on the plate when it’s not used, during the day as well as at night. 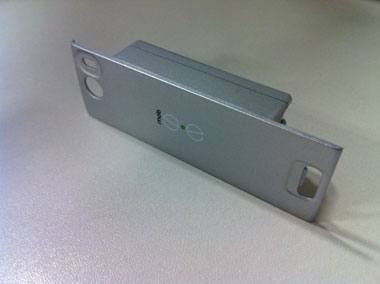 The concept of placing the device back on the plate to keep it charged up does take some getting used to, and more than once we forgot to charge it up overnight and started work in the morning only to find the battery flat. But once you’re in the habit of using it the Mobee Magic Charger works flawlessly.

If there was a single area of improvement we could suggest, it’s that some inductive plates have magnets inside that secure the device on the charging plate; this would be a nice touch for future iterations. However, as it stands the Mobee Magic Charger is hard to fault.