Google TV is only available in the US at the moment, and because so much of its functionality is tied into US-based services it is probably worth waiting for an official launch. Having said that, we like watching iPlayer in HD and being able to search for online television programmes direct from the television is a good – if somewhat cumbersome – feature.

Google TV is something you’ve probably heard of, but don’t know much about. It’s a rather odd combination of device and software platform that aims to bring an Android-based search and play service to your television.

As with the Android phones, Google won’t be making devices itself. Instead leaving the hardware up to third party providers. Logitech is the first out of the gate with this: the Logitech Review with Google TV. A black box unit combining Google TV software with multiple HDMI sockets, Optical audio, built in 802.11n wireless, and 2 USB 2.0 sockets.

Perhaps the most instantly striking thing about Google TV is the remote control. Unlike Apple’s minimalist effort, it comprises of a full QWERTY keyboard with additional buttons: play, pause, and control for your set-top box.

It’s true that Google TV changes the way you think about television. Mostly it makes you think: “Wow! I never thought television could be so complicated”.  But once you get over the initial head scratching it becomes a surprisingly compelling addition to your entertainment system.

Comparisons with Apple TV are, perhaps, inevitable (hey… this is Macworld) but in truth the Google TV and Apple TV offering couldn’t be more different. Even if you dislike its central premise, The Apple TV is pretty simple to understand: you plug it into a television and access iTunes from your Mac; or you either buy or rent movies and television shows from the iTunes Store.

Google TV, on the other hand, is a much more complex proposition. The idea is that you plug your current set-top box into the Google TV (in the US this would typically be a cable box; in the UK we imagine either Sky TV, Virgin or – most likely – a Freeview receiver); your current television service then routes through the Google TV and comes out via a second HDMI cable that runs to your TV.

Television plays as per normal, but press the Google TV home button and an interface overlays the television display; introducing access to search, applications, and a number of integrated services. 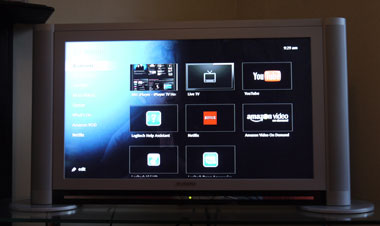 We’re testing a unit designed for the US here, so most of these services didn’t work: including Netflix, HBO, and Amazon Video on Demand. But it also includes YouTube, which obviously works and a few features that aren’t region restricted, like CNN news.

None of the services really matter though, because what’s really important here, the real killer feature, is the way it brings IPTV (Internet protocol television) to your TV thanks to a built-in Chrome web browser armed with Flash.

Not just iPlayer, but 4oD and ITV Player and all of the IPTV services you can access on your computer: Seesaw, TVCatchup.com, Sky Anytime+, YouView, Five.Tv. Even ones we’d never heard of before like STV and uPlayer. Suddenly it all becomes a lot more interesting when it’s on the big screen. 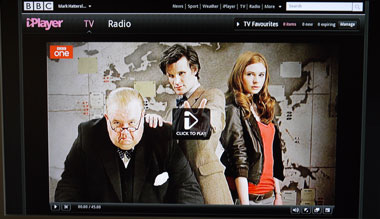 Apple and Adobe have their differences over Flash, but there’s no getting away from the fact that it powers most of the online TV in the world. The Chrome browser in Google TV also supports HTML 5 video, so Flash haters can be satisfied that it’s future-proof. Although arguments over Flash failings due to battery life fall away when it’s on a desktop device. And no, it didn’t crash.

Theoretically Google TV goes somewhat further than IPTV; you also enter the make and manufacturer of both your television and set top box, and Google TV acts as a controller for both. You should be able to use it to set and access DVR recordings on the set top box (you can even use the search function on recordings from the DVR); you can control the volume and on/off of your television and change channels through the Google TV remote. None of this worked in the UK, however, being designed purely to work with existing US-based cable set-top boxes. 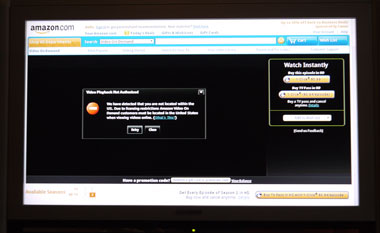 We should note that the Google TV remote includes support as a Logitech Harmony Remote, which means the Google TV can control over 5000 devices, from televisions to stereo systems.

The reaction to the Google TV in the US from the television industry has been overwhelmingly negative. ABC, CBS and NBC, and Fox plus others have blocked device – instead they are preferring to go down the Apple TV route of renting shows for 99c. The popular US video site Hulu (somewhat like our own Seesaw) has also blocked Google TV, but is said to be negotiating a separate contract

As Michael Learnmonth writes in AdAge:  “They are blocking Google TV because it is putting a web TV show, with web TV show economics, on a TV, which would be incredibly disruptive to their business… letting you watch “Glee” on your TV, but via the web and Google TV, means substituting high broadcast revenue for lower digital revenue.

Here in the UK, however, we have the BBC – which “due to the unique way it is funded” doesn’t really care for the difference between broadcast and digital economics. The BBC has committed to bringing iPlayer to as wide an audience as possible, and other networks like Channel 4 (4oD) and ITV (ITV Player) have been pretty much forced to come along, rather than let the BBC dominate broadcasting.

All three major IPTV services are now available on the PlayStation 3 platform, so there’s a precedent for IPTV on your home television in the UK. We doubt very much if any of the IPTV services in the UK will follow the US route of blocking content.

You also access full HD services from the BBC via Google TV, which includes a fairly stunning range of programs including the start of The Human Planet series. The version of iPlayer on the PS3 does not have high definition, and this is currently one of the few ways to get high definition IPTV in the world.

So, we get some a lot of services the Americans don’t like fully functioning IPTV from our domestic networks; but we don’t get some services they do, like Netflix and Amazon Video on demand. We don’t get the interaction with cable and the DVRs – although this will almost certainly change with a UK launch, whether our US model here can be upgraded with UK software remains to be seen though.

On the whole we think we’re slightly up on the deal here, which given that the device is designed for the US market, and a good two-thirds of its purpose doesn’t work over here in the UK, could go some way towards explaining the apathy towards it on the other side of the Atlantic. It should also bode well for a UK release, should it happen later on in the year.

So the idea behind Google TV is a good one, how is the implementation? Just as you can tell much about a man by his shoes, it appears you can tell a lot about a television set-top box by its remote.

The inescapable fact is that adding a computer operating system and keyboard to a TV is bound to complicate matters. And there is a big question mark over how complicated you want your television to be.

Google hasn’t helped matters with some odd design decisions. For example, when watching TV you press the Home button (far right) to open the main menu, or the Search button (bottom-left) to open a search bar; to return to TV you press the TV button (top-left) which is not to be confused with the other TV button (top right) which turns your television on or off. Effectively two on buttons, and two off buttons – located at four opposite ends of the keyboard. And what kind of madman places two different buttons marked ‘TV’ on a remote control for a TV?

There are other complications too, like the way the search results are primarily Google TV listings and for built in services, rather than actual Google web search results. Combine this with the fact that most of those services and results don’t work in the UK and you often end up chasing dead ends. Still you can organize and remove applications, and manage bookmarks and sort out the way search results are prioritized (again more fiddling).

You do spend an awful lot of time faffing about with Google TV, to the point where onlookers tend to say: “can we just watch TV instead”.

At the time we thought of this as a mere snub to television, and that Steve Jobs – like many tech heads – considers television a poorer activity than computing. But it may well be true on another level, you watch television when you want to turn your brain off; when you want to do something not particularly mentally taxing for a while.

Here’s a TV that really makes you think… the payoff is that you may end up watching The Human Planet in high definition rather than Come Dine With Me, and that’s a noble aspiration that we can all get behind. But I’d wager that most of the time you’d rather just flick through the channels, put some background noise on and play with an iPad or laptop instead.

Maybe it’s not unreasonable of us to want both the functionality of the Google TV with the minimalist design ethos of Apple TV. It does sound like a big ask, but we often wonder how the world would be different if Google and Apple hadn’t fallen out; how they could have achieved more together than apart. It’s clear that Google gets the web, and web services, and search results, on a very powerful level – it’s also increasingly clear that left to its own devices it doesn’t really get consumer electronics. 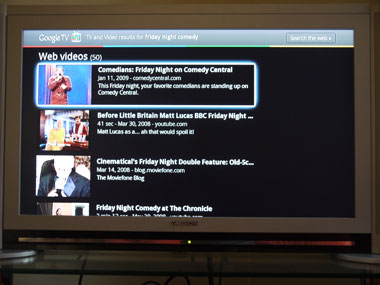 One thing that’s also clear is that despite protestations from the cable television companies IPTV, with high quality on demand shows, is very much the future of television. And Google TV goes a long way towards making that a reality today. But we can’t help but feel that the television of the future will not come with a QWERTY keyboard and a trackpad.

Getting back to the here and now, the Logitech Revue with Google TV isn’t particularly cheap, coming in at $300, which will ensure a price point of around £250 when it arrives in the UK. In the US it’s already a good $200 more expensive than the Apple TV. Consider it lacks internal storage that seems rather a lot to ask just to watch Flash-based video on your TV.

And we’re not wholly convinced by the quality of the construction. While it looks passable, it doesn’t have the build quality of an Apple product and the built-in antenna didn’t seem as powerful as our Apple TV (it was unable to reach a 802.11n network perfectly acceptable to the Apple TV).

Still, it’s interesting and you can’t take that away from it. The Google TV is a big advance towards an internet connected future and if they rework some of the interface complexities, dumb it down a bit, and get the UK version to work with SKY and Freeview boxes and we could be in for a treat.