The learning curve behind AutoCAD 2011 for Mac is steep. To produce basic drawings takes practice and to create the 3D imagery associated with the application somewhat more time. The demands of the program on your system are high, so this isn’t suited to an entry-level machine. AutoCAD 2011 for Mac shows potential, but the absence of a number of features makes us wonder why the price appears to be higher than that of the PC version.

AutoCAD 2011 for Mac is the first native release of Autodesk’s market-leading computer aided design program since 1992. If you’re already familiar with AutoCAD on the PC you’ll see a mixture of both the familiar and the new in the opening window.

The ribbon bar, a long-time feature of AutoCAD PC, is missing in the Mac version. Autodesk has decided to make the interface a little more Mac friendly; even supporting preview of the DWG files on your system using Cover Flow. This makes it a lot easier to see which file you need before opening it.

If you have a Magic Trackpad or Magic Mouse you can use the pinch gesture as you would on the iPhone or iPad to zoom in and out of a project. 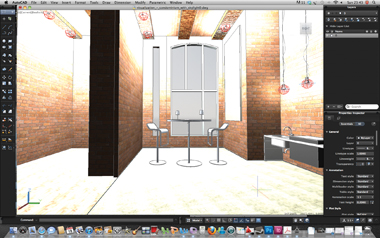 AutoCAD 2011 will open all existing DWG files. If the file uses a feature that the release doesn’t support, the application will do its best to open it – this provides you with the scope to consider a workaround if you actually need that feature of the package.

Whereas you can have multiple workspaces in AutoCAD PC, in the Mac version you have just one with three different custom toolsets. You can add to these with ease, and manipulating them is a case of dragging and dropping from one side of the customised window to the other.