Seashore’s not perfect. You’re stuck with GIMP’s workflow which demands that you create a new document at start-up. But, it’s a vast improvement over its parent and much better than many commercial budget tools.

Talk to open source advocates about software and there are two applications they’ll cite as successful. Productivity suite Open Office and Photoshop-a-like GIMP. Thing is, as feature-packed as both these tools are, neither are very user friendly. The nature of open source means that they were, in effect, designed by a committee of geeks. And it shows.

In GIMP’s case, this has seriously affected its adoption by ordinary consumers. You spend as much time working out how to use it as you do actually using it. Enter Seashore, an implementation of GIMP with an interface that normal people can understand.

Seashore replaces GIMP’s floating panels and nested dialogues with a friendlier single-window interface for each project. It’s 100 per cent Cocoa too, so is completely OS X native. A sidebar contains layer and image data, while tools can be accessed from a menubar at the top of the document. They’re the usual collection of image editing and selection tools familiar from other Photoshop clones. 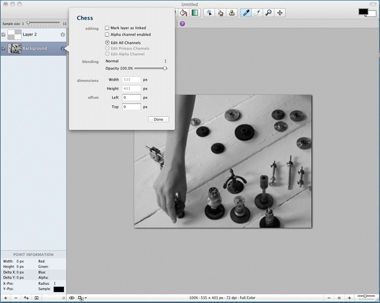 Seashore packs some serious features into its compact interface

Other features that are hidden in GIMP are easy to access in Seashore through the main menu. You’ll find filters in the Selection menu and you can apply transformations to the current document from the Image menu.

It’s a reduced selection of the functionality provided by GIMP though, concentrating on the basics of image editing, conversion and texture creation. In short, it’s an ideal tool for web designers and amateur photographers, but probably not as powerful as Photoshop.