We missed the PC version of Snagit’s ability to autosave files, with variable names, in the beta version. It’s not in the final version either. Overall though, we’re impressed enough with Snagit on Mac to think of it as our new favourite screen-grabbing tool.

We last reviewed Snagit on Mac during its beta testing phase. It’s been a favourite of ours on the PC for a number of years, so we were naturally curious to see how the Mac version would turn out. The answer is, it’s pretty close to perfect.

We mentioned last time around that Snagit for Mac looks better than its Windows equivalent. In beta, we put that down to a reduced feature set. Over the years, the PC version has amassed features at a pace, changing its interface radically. Still, there’s quite a bit of clutter. Not so in the Mac version, which reduces the default dialogue in Snagit 10 (for Windows) down to a single floating panel. When not in use, it appears as a tab at the side of your screen.

With Snagit on Mac’s All-in-One capture, you don’t need to configure window, selection or full-screen ahead of invoking the tool. You just use a keyboard shortcut or click the Snagit button. 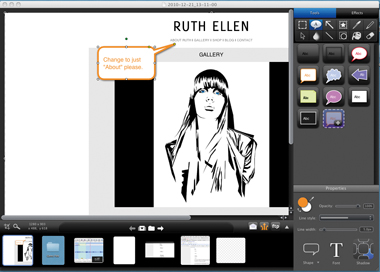 Snagit for Mac has lots of uses, from keeping track of website snippets to illustrating your own tutorials. One licence works on Mac and Windows, but not simultaneously

The smart Snagit crosshairs zoom in and adapt to whichever type of selection you want – including scrolling selections.

New captures are opened in Snagit’s editor, a powerful tool for cataloguing, annotating and then saving your screen captures or sending them to another output.

The tool enables you to email grabs, post them online at www.screencast.com, upload to an FTP server or add to the clipboard.