Urban Terror may be a free game, but that doesn’t mean it skimps on options. It’s one of the most configurable shoot-em-ups we’ve ever encountered, with many a menu screen to peruse and tweak.

Multiplayer online gaming is no longer the novelty it was when Quake first introduced fully 3D fragging to the internet. Free gaming experiences are still thin on the ground though, so hurrah for Urban Terror, a net connected, first-person shooter that’ll cost you nothing.

Based on the same engine as Quake 3, this is a standalone project. Using ioQuake3, an open source extension of the original source code, you don’t need to buy or own Quake 3 to play. If you do, fine – you can launch Urban Terror using ID’s original engine.

Among the more traditional choices of Deathmatch (called Free for All here) and Capture the Flag, there are options that are less likely to get you repeatedly killed. Try a more sedate Team Deathmatch game, for example (à la Call of Duty), or play Team Survivor – there the object is to be the last team standing. 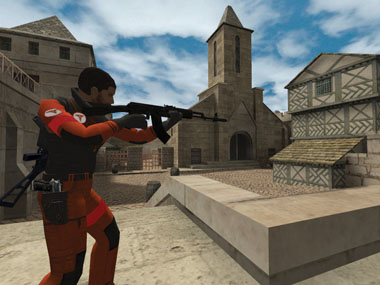 Hook up with friends or shoot strangers; there are many levels to choose from

The levels range from quaint foreign locales with rural architecture, to industrial zones full of ladders and sniper vantage points. You’ll even find an environment modelled on a typical English town.

Whichever level you pick, we suggest sitting through the tutorial first – or you may take more than a few bullets from more seasoned players.