LiveCode, inspired by the programming language HyperTalk, aims to simplify the process of writing apps, utilising a language based around understandable English syntax, wrapped in an intuitive user interface.

You create a stack with a set of blank cards; you can then set about placing buttons, images, checkboxes and text-entry fields. Like many IDEs, there’s a healthy element of drag-and-drop, allowing for simplified layout and design.

You quickly see how powerful this package is. It makes good use of iOS features, supporting inertial scrolling and pick wheels, as well as bitmap and vector graphics. You can utilise the accelerometer, multi-touch and motion detection and incorporate audio and video playback. 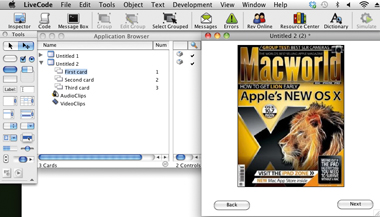 Hanging everything together is the language. Scripts are associated with objects; they, in turn, contain handlers, which start with the word ‘on’. Say you’re creating a set of buttons that flip from one card to another. For the Back button, you would write ‘on mouseUP go to the previous card end MouseUp’.

Because you program in real time, there’s less debugging to be done at the end of the project and with one click, you can access the iPhone Simulator and see your project at work.