Some people might prefer a keyboard that’s purely designed for the iPad, but at £39.99 the Genie is good value, and its rechargeable battery will save you money on batteries, too.

Using a built-in rechargeable battery rather than AA batteries allowed Voix to keep the Genie slim, making it very easy to slip into a backpack or briefcase along with the iPad. Voix says the battery should last for about 40 hours when fully charged and it has a proper On/Off switch to preserve the battery when it’s not being used.

The keyboard layout is fairly conventional, and despite its small size it has a row of function keys running along the top of the keyboard that can be used to control a number of iPad features. However, you also need to press the Function (Fn) key in the lower-left corner of the Genie keyboard, in order to activate the iPad function keys.

If you don’t press the Fn button, the Genie acts like a normal computer keyboard, with that top row of keys acting like the standard F1-F12 keys. The Genie also has just a single-height Enter/Return key like a US keyboard, rather than the double-height key found on most UK keyboards. 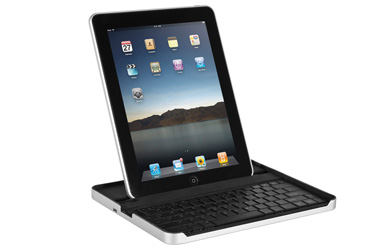