The HyperDrive appeals as a portable back-up device that gets around the iPad’s storage limitation. However, it can feel a bit sluggish and is quite expensive, too.

One of the very few complaints levelled at the iPad is that it’s not possible to increase the amount of internal storage built into it. You don’t need a huge library of music and video files to quickly fill up the 16GB and 32GB models, and even the most expensive iPad model has a modest 64GB of storage.

Some people argue that the iPad should contain an SD card slot to enable users to store and access files using expandable storage – something that’s not likely to happen. However, HyperMac’s new HyperDrive is an ingenious – if pricey – way of getting around that issue.

The HyperDrive is essentially a conventional hard drive, available in sizes between 320GB and 750GB, but it also sports a 3.2in colour screen that displays a series of icons for the main controls. You can connect the HyperDrive to a Mac or PC using a USB cable, and copy photos and video files to it just like an ordinary hard drive.

The HyperDrive also has two slots that take most types of memory card (CF, SD, MMC, MS) so that you can quickly transfer files from a digital camera. HyperMac claims that battery life should last long enough to transfer about 250GB worth of files back and forth. 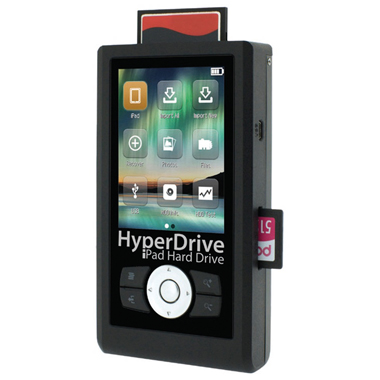 Finally, a solution to storing more photo and video files for viewing on your iPad

Photos that you transfer onto the HyperDrive can be previewed on its own screen, before you connect it to your iPad. You can only connect the HyperDrive to an iPad by using the USB adaptor that’s part of Apple’s Camera Connection Kit – this costs another £25, but most keen photographers will probably own one already.

You connect the HyperDrive to the Camera Connection Kit and then use the screen on the HyperDrive to locate the folders that you want to transfer onto the iPad. The contents of each folder then appear – rather miraculously – on the iPad’s screen. You can tap the Import All button on the iPad to import the entire folder, or tap on individual photos or videos you want to import. Your files are added to the Photos app on the iPad, ready for viewing. Want a stock of videos for a long flight? Bring them along on the HyperDrive.

But the HyperDrive does have a couple of rough edges. The on-screen controls are a bit slow, and there was sometimes a pause before it made the connection. You can’t transfer files from the iPad onto the HyperDrive either to free up space.