Just Mobile’s Slide is an elegant and well-built solution for keeping an iPad upright in any number of positions, whether it’s for watching a movie, playing a game or typing an email. It’s also very portable – being both small and light. It’s a little pricier than we’d like, but we are impressed with the simplicity and ingenuity of this stand and it does come recommended.

There’s a wealth of iPad (and iPhone) stands on the market, but we’ve rather taken a shine to this innovative offering from Just Mobile, the Slide.

The Slide is an incredibly clever solution to producing a stand sturdy enough to hold an iPad upright in a variety of positions, but small and light enough to carry around without weighing you down.

The stand consists of a single piece of curved metal with a cylinder shape at one end and slight lip at the other (forming the slide that gives it its name). Inside the cylinder part is a tube of rubber with a metal core that you extract when you want to use the stand. It’s this simple tube that will hold up your iPad. Yes, really.

You position the iPad on the hooked lip part of the slide, which is rubberised so as not to damage your device, and then simply place the rubber tube behind it. This holds it vertically or horizontally in place. Moving the rubber tube up and down the slide enables you to adjust the angle that the iPad is held at. (It’s probably easier to just look at the image below than try to picture that in your head.) 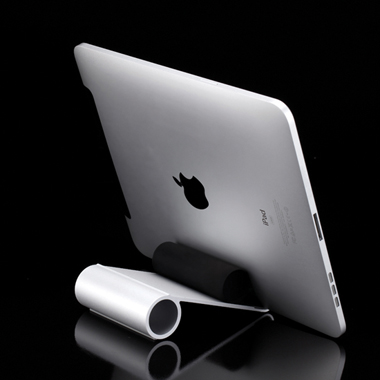 It’s a little pricier than we’d like, but we are impressed with this pocket stand

It’s a clever solution because the whole stand is just 120 x 85 x 34mm making it small enough to carry in a pocket. And because it essentially consists of a single non-movable piece of metal and a rubber tube it’s unlikely to ever break or malfunction.