We’re always looking for a true contender to take on the Apple Mac mini as the perfect discreet desktop PC, or as a stylish, compact and quiet media centre PC for the lounge. There are still no true rivals, and the latest slew of performance updates just widens the gap with the competition further. A new, lower price of £529 for the entry Apple Mac mini simply sweetens the deal.

It’s a move we’ve seen before, just a few months ago with the running revision to the MacBook Pro line of laptops. Outwardly, the computer looks identical to the previous model. Look more closely, and you find an electric-flash logo above the monitor connection port. Then, inside, we find all hell has broken loose – in benchmark terms at least.

So the new Apple Mac mini – unveiled by Apple on the same day it unleashed the Lion from its software development labs – has had something of an internal overhaul. Where last summer’s two regular models had middle-aged Intel Core 2 Duo processors clocked at either 2.4GHz or 2.66GHz, the new gang sport powerhouse second-gen Intel Core-series processors. Those Sandy Bridge chips don’t half make a difference.

Before we look at the scores, let’s bear check off some other performance nips and tucks. Memory has sped up from 1066MHz to 1333MHz DDR3 RAM. Hard drives are a little larger too across the range, 500GB 2.5in notebook drives as standard, in place of 320GB disks.

It won’t make much difference to the supplied hard disks, but the internal SATA bus of the Apple Mac mini is now specified for 6Gbit/s operation. And while Apple will exchange the disk for a high-performance SSD if you’re feeling particularly flush (add £480 for the 256GB drive), we’re not sure if even that will be 6Gbit/s SATA-enabled. If you do want the light-speed SSD experience, you might be better off finding your own 6Gbit/s SATA drive, such as the Crucial M4 which should then allow data transfers well beyond 400MBps. Beware though that OS X’s nascent support of Trim will be unavailable on third-party SSDs. 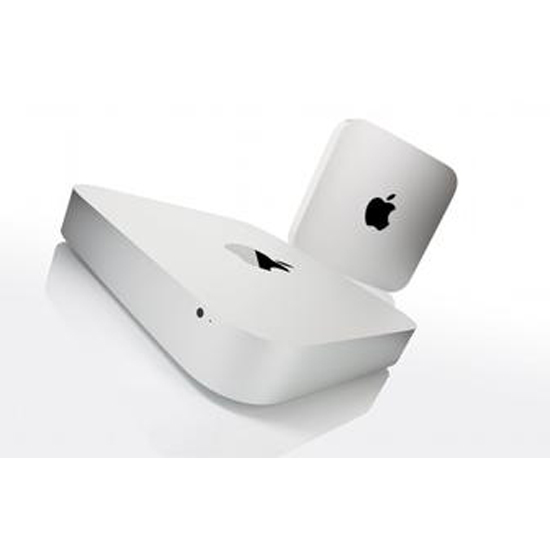 The Apple Mac mini (Mid-2011) is easy to open up to exchange RAM; to replace the hard drive just requires the removal of the fan and perforated wireless antenna board

Even shunting data at close to 3.5 gigabit per second starts to look sedate though, when you realise what the digital monitor port can now do. It may look like the same old Mini DisplayPort that Apple’s been fitting for three years now, but the aforementioned lightning strike gives away this port’s true nature – Thunderbolt.

Developed by Intel with input from Apple, and originally named Light Peak in deference to its optical basis, Thunderbolt is the de-facto incarnation of a hyper-speed data conduit of many supposed capabilities.

It’s based on PCI Express, only is a lot more hot-swappable. It’s Apple’s 21st-century replacement for FireWire, for one, built to hook up external storage in such a way that the wires don’t become the bottleneck, as they currently are with FireWire, USB, SATA, ethernet – in fact pretty much all the cable we still use to get data from one place to the next.

Shame, then, that as of press time, the only thing we could find to plug into one of these ports is… a monitor. 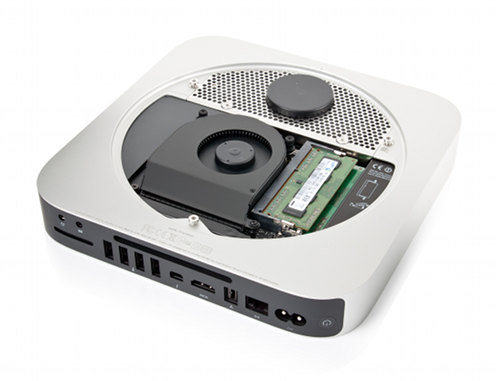 We can only guess that some chronic technical issues have held up the mass roll-out of this super-luminal external storage that will bring smiles to the faces of professional video editors – and others who fancy the idea of moving tens of gigabytes of data from PC to storage array in the time it takes to say ‘seconds flat’.

Bluetooth has skipped a generation – from 2.1 to 4.0, missing out 3.0 – which could mean faster file transfers for those that still zap data the Bluetooth way, as well as improved power efficiency. That would be good for battery-eating wireless mice, although we’d imagine this will require a new rodent on the desk too first.

Two main models of Mac mini are offered: entry-level gets a 2.3GHz Intel Core i5-2415M processor, the M-suffix indentifying it as a laptop chip, but still featuring the useful Hyper-Threading trick of making two real processor cores look like four for certain apps; and Turbo boost, to punch through the speed ceiling – in this case, up to 2.9GHz for short-term spurts of productivity.

And significantly, the price of this entry model has fallen since last year. When launched, the cheapest Mac mini was a steep £649. Now, this far more powerful updated PC is being sold for £529.

We tested the next model up, with 2.53GHz Intel Core i5-2520M processor (3.2GHz Turbo), and priced at £699. This Mac mini also double the memory quota to 4GB, but otherwise has exactly the same spec. Well, nearly.

The key difference is in the graphics engine. Just like the entry-level 13in MacBook Pro, Apple has saddled the cheapest Mac mini with Intel HD 3000 integrated graphics.

Providing all you need is a PC to do regular PC duties – up to and including watching high-definition video – you won’t notice the shortfall. But as with the MacBook Pro, we have an unusual situation of a PC manufacturer lowering some key aspects of performance in a refresh.

The previous generation sported nVidia GeForce 320M graphics, which were quite capable of some decent gaming, provided you didn’t max out the detail. With Intel graphics, you get great fuel economy – heat is reduced, which translates into reduced fan annoyance – but ambitious gaming is a no-no.

But on the dearer 2.53GHz Mac mini, Apple has snuck in a discrete graphics card from AMD, a Radeon HD 6630M with 256MB of dedicated GDDR5 video memory.

Absent from all Mac minis now is an optical drive. Like the slotless server model of the Apple Mac mini introduced last year, every mini now has a plain front, save two black dots for IR sensor, and a smaller on/sleep light.

Now that Apple distributes all its software online, including the OS X Lion operating system, that’s not such a problem. If you still enjoy watching DVDs or Blu-rays from the original silver disc though, you’ll need to find an external drive.

(Setting up Windows with Boot Camp was always quite straightforward. It’s now even easier in the post-optical age, as Apple offers to make a bootable Windows USB stick out of your Windows .iso, adding in all the necessary device drivers which can be downloaded from Apple whenever required.

With the ready availability of all the necessary drivers in one installer, it’s easier to install Windows on a Mac than it is on a Windows PC).

Last year’s 2.4GHz model with Intel P8600 scored 93 points in WorldBench 6, indicating a relatively quick PC able to take on some creativity without forcing you to wait around too long.

This Mac mini has dramatically raised its game – all the way up to 123 points in WorldBench 6. That’s a 32% score increase, more than enough to move this desk-hugging slug of aluminium into the performance-PC realm.

We tried the venerable FEAR game to test the AMD Radeon HD 6630M’s mettle, setting the detail quality to Max. It played at a smooth 53 fps, up from the 29 fps of the previous nVidia’d Mac mini.

Going higher slowed the action, of course: our ‘hi-spec’ test of 1920 x 1080, Ultra detail and tessellation on, gave an unplayable 14fps. Nevertheless, this AMD processor, a successor to the popular AMD Radeon HD 5650 found in high-end laptops, proved a worthy graphics-wrangler for gaming.

For Mac OS X benchmarking, we found Xbench would fall over in the thread test; and since the app is not Hyper-Thread-aware, it no longer gives accurate results here anyway.

But turning to Geekbench we saw a six-run average score of 7049 points when running OS X. This suggests close to a 40% increase in memory and processor performance over last year’s comparably clocked MacBook Pro 15in (2.53GHz Core i5-540M: 5073 Geekbench points).

Apple was always proud of the vanishingly low power consumption of its Mac mini, yet failed to publish any figures for this model.

There’s little to worry about here though, despite all the extra performance. Looking again at the faster 2.5GHz Mac mini with its dedicated graphics processor, we still saw only a 11W power consumption at the idle OS X desktop, rising to a worst-case figure of 57W, in Windows, playing Crysis