Although the interface might be a little confusing at times and rather plain looking, Video Monkey definitely gets the job done. And for those who don’t like to tinker with video and audio settings, it’s nice to know that if you drop a file into Video Monkey, choose a preset for your target device, and press Start, you’ll end up with a file that works.

There are many applications that can convert video into formats that are friendly to iTunes and the iPhone, iPod, iPad, or Apple TV. Of those, there’s an interesting subset – including Video Monkey – that can not only encode files, but also tag them with TV show or movie metadata at the same time.

To convert video, Video Monkey offers a number of Apple-centric presets, designated by the type of device they’re meant for. The presets differ in the frame size, frame rate, bit rate, and audio quality they provide.

To get Video Monkey to automatically look up metadata based on a file name, you need to go through several steps as a one-time setup. If Video Monkey finds the information for your file, it will populate as many fields as it can – for exam  ple, TV show episode, TV series title, episode number, description, media kind, and so on. The info is similar to what you’d get purchasing content from the iTunes Store. 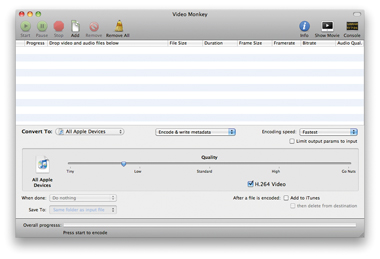