Intego’s anti-malware efforts for iOS are valiant but underwhelming. The proactive approach isn’t a problem if you’re security-conscious, but basic reports and the lack of detail about infections fail to carry that demand to its logical conclusion. Ultimately, VirusBarrier’s weaknesses leave you feeling less empowered than you’d hope.

It’s difficult for iOS devices to get a virus, but VirusBarrier lets you scan email attachments and files shared online to protect your image, if nothing else, instead of ignoring that files you share might infect other platforms.

It demands a take-charge attitude in place of background scanning used on the Mac. Email attachments have to be checked by choosing to open them, one at a time. However, if the attachment can’t be read by iOS or an installed app, Mail can’t send it to VirusBarrier.

Connecting to Dropbox or iDisk lets you scan files that have been uploaded for you. Conveniently, you can scan whole folders. VirusBarrier looks inside Zip files, although it missed the (harmless) Eicar signature inside one of our test files. Also be cautious of other archives, such as Tar. They’re treated as single files, so their real contents are overlooked.

When an infection is found, its name is shown. What you can do with that information is poor. There’s no explanation of the risk and no way to copy details to inform the sender. On the plus side, files are rescanned after an attempt to clean them. 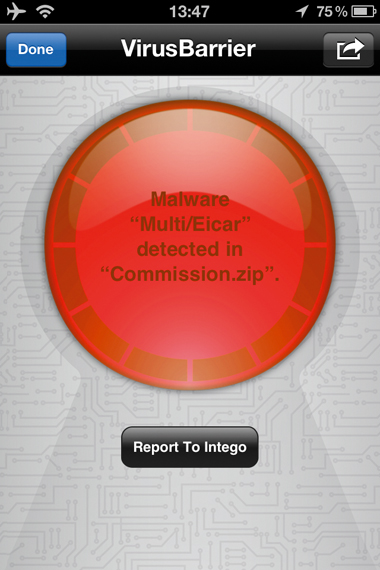 You can’t miss that VirusBarrier has found an infection, but it doesn’t provide details to send to the file’s source

There’s an argument for using VirusBarrier to protect against potential security flaws. PDFs were a potential attack vector in some earlier versions of iOS, so there’s some peace of mind if you regularly receive such files. Annoyingly, JPEGs received as attachments can’t be scanned.