Tales of Monkey Island HD is brilliantly daft escapism. Episodes are sold individually, which is good if you’re uncertain about ye olde adventure style, despite its 3D makeover.

Buckle up, buccaneers, for a five-episode adventure in the boots of hapless hero, Guybrush Threepwood. This time, Telltale abandons the illustrated style of the first two Tales of Monkey Island games for a 3D world. The iPad adaptation has lower-resolution textures and is missing some effects from the Mac version, and it’s a little jittery in places, but the animation and top-notch voice acting bring the world to life.

Threepwood is moved by holding a thumb on screen and sliding it around. That can be awkward when the camera angle changes dramatically, but thankfully the game doesn’t depend on precision movement and timing.

Dialogue is laden with the laughs and wryness for which the series is famed. Tales of Monkey Island demands a little patience and thought. If you do get stuck there’s a hint system to help you get back on track. This is best turned off and used only when you’re really stuggling. That way you can savour the brain teasers, which lack replayability.

Beware switching to another app. The game immediately reverts to when you last manually saved. That’s a horrible oversight on Telltale’s part. But if you can forgive that, the episodic structure of Tales delivers a twisting story that will keep your brain busy for hours. 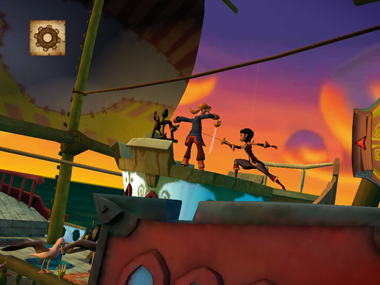