Some business users may also question the Time Capsule’s reliance on Time Machine to control the backup process. Time Machine is fine if you’re happy to just accept its automated backups of your entire system, but it may be somewhat limited for some business users who want greater control over scheduling and other aspects of the backup process. Still, for plug-and-play simplicity, it’s hard to fault.

However, it’s fairly pricey, at £249 for the 2TB model, and £399 for the 3TB model that we tested here. Still, the Time Capsule is a lot more than just a simple NAS drive. It can also be used as a wireless router to set up a WiFi network in your office, or perhaps to extend an existing wireless network into another areas. It has three additional Ethernet ports for wired connections, and a USB port that can be used to share a printer or to plug in additional storage devices. It even allows you to set up a ‘guest’ network in order to allow temporary access for people who might be visiting your office.

The one thing it doesn’t do is to act as a modem for cable or ADSL internet connections, which means that you still need to connect it to an existing modem or router that you use for internet access. If you have a wireless network already set up, then the Time Capsule’s expensive wireless features might simply seem unnecessary.

The Time Capsule does work very well as a straightforward NAS drive, though. Its great strength – as you’d expect from Apple – is its ease of use and speedy Mac data recovery. The Time Capsule can work with Time Machine on multiple Macs, so all you have to do is connect it to your network and just allow Time Machine to automatically do a complete system backup for every Mac in your office. It’s also extremely fast, with wired connections providing backup speeds of 22.7MBps. Wireless backup is much slower though, coming in at round 7.5MBps, which again makes us question the usefulness of the Time Capsule’s WiFi features. 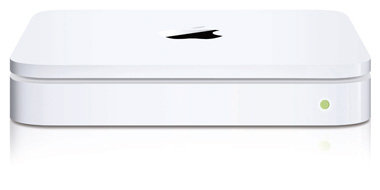