The Gigabit NAS isn’t terribly fast either, as its 14.5MBps speed puts its performance towards the lower end of the range in our backup tests. To be fair, the low price of the Gigabit NAS makes it a good choice for home workers or small businesses on a tight budget. However, it’s not the most user-friendly drive in this group – it’s complexity could easily overwhelm novices – so it will mainly appeal to more experienced users who have the technical know-how required to use it properly.

At just over £100 for 1TB of storage, Verbatim’s Gigabit NAS drive is easily the most affordable product in this group. However, while it does work with Macs, it’s not quite as instantly Mac-friendly as most of its other rivals on test.

The setup program supplied on the CD runs on PCs only and the rather jargon-heavy manual hardly mentions Macs at all, so you’ll need to know a bit about networking to get the drive set up properly.

Thankfully, the Gigabit NAS does support Apple’s Bonjour networking feature, so it’s simple enough to locate the drive and configure it using Safari. However, even the drive’s Quick Start Wizard tends to throw quite a bit of technical jargon at you, so this isn’t really the best option for small business users who may not have trained IT staff to help them out.

Other options, such as those for creating user accounts and shared folders are also a little confusing, and tend to use jargon – such as  /mnt/ide1/ – that won’t mean much to most Mac users. We were, however, pleased to see that activating the iTunes server option was a simple matter of clicking a button in order to make the drive appear within iTunes. 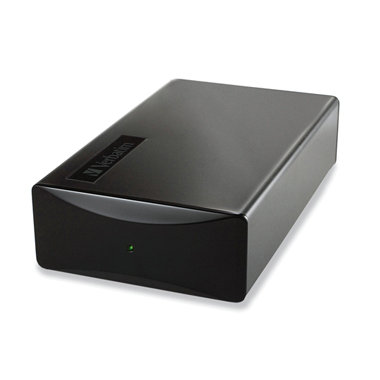 Verbatim’s Gigabit NAS is one of the cheapest NAS drives available, but it’s best for those with some technical know-how

Unfortunately, backing up files onto the Gigabit NAS is far less straightforward. We couldn’t find an option for configuring Time Machine backups in the drive’s browser interface or in the manual, and when we contacted Verbatim no one seemed entirely sure whether the drive worked with Time Machine or not. There is a backup program called Nero supplied for PC users but, again, this doesn’t run on Macs, so Mac users may simply have to find some alternative backup software.