It’s worth repeating that this update only affects the software; 2010/2011 nanos can get all of these feature for free by updating in iTunes. But if you don’t own a sixth-gen nano, this is well worth the money. The 2010 model was already a big step forward from its predecessor. Its smaller chassis, belt clip and pedometer all showed that Apple was targeting this player at a specific market (music lovers on the go) and a specific use (adding music to physical activities). The high-resolution touchscreen display is a pleasing bonus. With these updates, the pedometer is entirely self-contained, the touchscreen display is a bit easier to use and the price has dropped. A great product just got a little better.

Like the iPhone 4S, the updated iPod nano is a subtle enhancement of a much-loved predecessor, rather than a revolutionary tear-down. In fact, only the software has been modified, and by plugging in and updating, owners of the 2010/2011 nano will be able to get all of the upgrades featured here.

Nevertheless, the software changes make for an improved user experience, and suggest Apple has given careful thought to the way its fans choose to use the nano. There’s also a nice price cut to sweeten the deal: from £131 to £115 for the 8GB and from £163 to £129 for the 16GB.

Fit and you know it

The biggest change is aimed at fitness fanatics. Apple has added accelerometer support, which means the pedometer function is entirely self-contained. 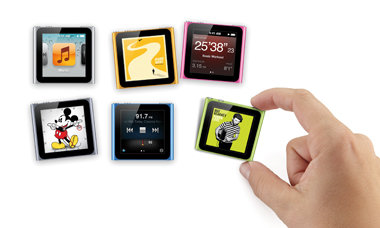 The fitness app is a great feature that’s easy to use. You select Walk or Run (splitting them into two options is a new feature) and, if you’re doing a run, select a time, distance or calorific total to aim for. Then you can choose to run to a specific playlist or Genius mix, and  off you go. A calm voice then informs you when you pass various milestones.

Accuracy-wise, a dedicated pedometer is likely to provide more definitive accounts of your distances. But the sheer convenience of having it all built into the nano is fantastic.

The interface has been mildly tweaked. Rather than the old system of four small icons arranged in a square grid, you get the option of having one larger icon occupy the whole screen.

It makes it much easier to use the iPod and looks nicer, too; and has the added effect of encouraging a lot more swiping from side to side, which makes the experience feel more iOS-like.

Apple has also added lots of optional faces to the Clock app, in a nod to nano users who like to wear it as a watch. On the down side, most of the 18 faces feel a bit disposable, and it would have been nice for Apple to bundle a strap.

These changes apart, things are pretty much the same as in the 2010 nano. It’s a small, sturdy, square iPod with a built-in clip, making it great for portability; the touchscreen display is 1.5in and 240×240 pixels, and pleasingly clear and bright. It also has multi-touch functions, most notably the ability to rotate the entire screen with a two-finger swipe.

There are three hardware buttons: a screen off/on button top right, and volume controls top left. Hardware volume controls are a huge plus when you’re trying to pump up a power track mid-sprint.

As on the 2010 nano, there’s a voice feature called VoiceOver, which adds a gloomy robot voice reading out whatever you’re tapping. It’s potentially useful for selecting tracks when running, but it takes a lot of effort to get used to, and completely changes the way you use the iPod – to activate something you’ll need to use a double tap, and you have to double finger-swipe to move screens.