iMessage could be great. It brings text messaging to the iPad and iPod touch, and it brings group conversations to your iOS devices. We like the fact that we can now send a message to a group of people and then join the discussion; we’re just disappointed that the discussion seems to be limited to one device, rather than appearing seamlessly on iPad and iPhone. There’s also the problem that should one of the people in your group not have iMessage set up, or if they are out of range of 3G or WiFi, none of the recipients will receive the message as an iMessage.

When Apple first launched the iPhone people wondered why it didn’t feature an iChat-style messaging service, allowing you to send free text messages to your friends via your internet connection rather than your mobile network. The conclusion was that the networks would never allow Apple to take this revenue source away from them.

Well, it looks like the networks have conceded to Apple. The launch of iOS 5 brought iMessage to all iOS devices. As long as you have a WiFi or 3G connection, and as long as your recipient has an iOS device, has set up iMessage, and also has a WiFi or 3G connection, you can send your message for free. We say free, but you do need to factor in the data limits on your mobile contract, and, of course, it’s worth bearing in mind that you may have thousands of free text messages available on your contract anyway. Luckily, iMessage offers much more than just free texts. One of the best features is the ability to send group messages, where every recipient receives the chain of messages on their iDevice. It’s like iChat on your phone.

Unfortunately, setting up iMessage is not as streamlined as you would expect from Apple. If you presumed it would automatically start working after you updated to iOS 5 you presumed wrong. On the iPhone you need to go to Settings > Messages to turn iMessage on. To begin the set-up process you’re asked for your Apple ID. Once you’ve registered, your phone number will appear in the Receive At box. You can also add email addresses that can be used for alternative Receive At locations. Note that adding an email address here doesn’t mean the iMessage will be sent to that email address. It means that if someone sends an iMessage to that email address it will appear in Messages on any device identified with that address that’s set up to receive messages. 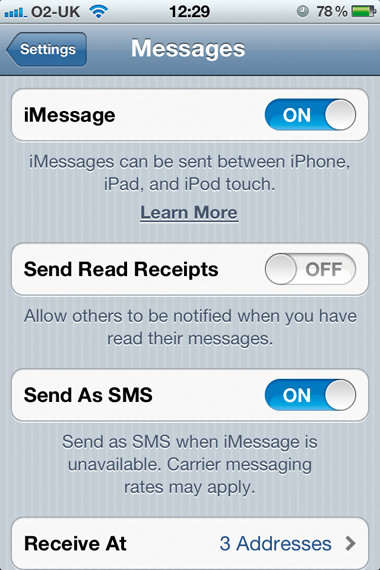 You turn on iMessage in Settings, then you can choose other options such as if you want others to see when you’ve read their message

There are various other options: you can indicate whether you want others to see when you’ve read their message; and you can allow your phone to send a message as an SMS if the iMessage can’t get through (should your recipient be out of range of 3G, for example).

If you’re setting up iMessage on an iPad the process is similar, with the exception being that a phone number option will not appear. You add your email addresses here as an identifier. Any message sent from an iOS device to that email address, or a phone number that has that email address associated with it, will be delivered to all your iMessage-ready devices. At least that’s what you think would happen. In our tests messages sent to an iPhone didn’t appear on the iPad; the only messages that appeared on the iPad were ones sent to the email address identified with it.

This means that if you’ve been chatting to a friend in iMessage on their iPhone, using their phone number, they can’t then pick up the discussion on their iPad. To compensate for this you could send the messages to their email address, but should you be out of range of 3G or WiFi your message won’t default to being sent as a text message. We can’t understand why messages sent to a phone number aren’t also delivered to the email address you add in the Receive At box.

We were also frustrated to see messages in the Messages app on the iPhone appearing in separate threads to those from the same person depending on whether they were using an iPhone or an iPad. It’s a bit of a mess.