These quibbles aside, Infinity Blade II is the perfect sequel, keeping and expanding almost everything that was great about its predecessor, and fixing the few things that didn’t work. The graphics are even better, you’re forced to approach the fights more imaginatively, and there’s significantly more content. If anything can force the world to take iOS gaming seriously, this is it.

Not many games get the honour of stage time in the middle of an iPhone launch, but when Tim Cook’s team wanted to show off the 4S‘s gaming chops, they made a call to Chair, the makers of Infinity Blade, and asked how the sequel was coming along.

A sort of one-game riposte to console snobs who don’t take mobile gaming seriously, Infinity Blade brought craft and ambition to the iOS platform. It had stunning graphics, slick gameplay and surprisingly deep RPG elements, leavened by a dip-in piecemeal style that perfectly suited gaming on the go.

Two months after wowing the 4S launch audience in demo form, Infinity Blade’s salivatingly awaited sequel has burst on to the App Store.

But can it improve on the beloved original? And in pushing the limits of Apple’s A5 processor in the 4S and iPad 2, has Chair made a game that less fortunate iOS users won’t be able to enjoy?

A5 haves and have-nots

Let’s tackle the second question first. Infinity Blade II is certainly a magnificent feat of programming, with graphics that surpass even the original game – you have to see the background landscapes to believe them – and fast, responsive gameplay. It’s a showpiece for what today’s mobile hardware can accomplish, and logically must make great demands on the processor. But the App Store’s specifications state that as well as the A5-equipped iPad 2 and iPhone 4S, the iPad 1, iPhone 4 and 3GS and two generations of iPod touch can run the game too.

(A spokesperson for parent company Epic Games told us they would have preferred – but were not permitted – to be able to specify 16GB+ models of the third-gen iPod touch, however.)

In practice, A5 devices will be at an obvious advantage. We found the game ran like a dream on iPad 2, but we experienced a few crashes on iPhone 4; while some early users have complained of more frequent problems on iPad 1. An update has been issued to address these reports, and the spokesperson assured us that more are on the way: “We’re working to support the community as quickly and thoroughly as possible.” 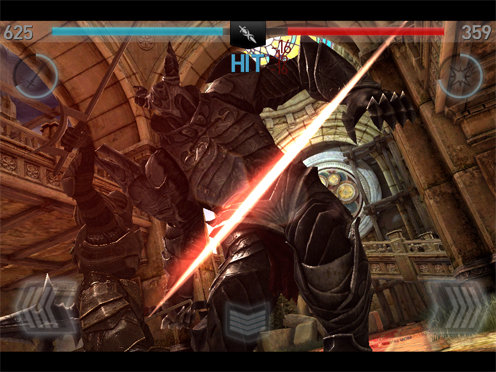 So how does the sequel compare to the original? The structure is essentially the same – it’s a series of one-on-one battles with giant monsters, each time attempting to master their attack patterns and respond with the correct combination of parries, dodges, blocks, counter-attacks and magic spells. All of this is fully touchscreen-based: you swipe in the direction of the attack to parry, across the enemy to attack, or on the side of the screen to dodge.

Don’t expect a free-roaming RPG a la Skyrim – this is a series of superbly realised but heavily scripted set-piece fights, with a small amount of choice in the routes you take between them. 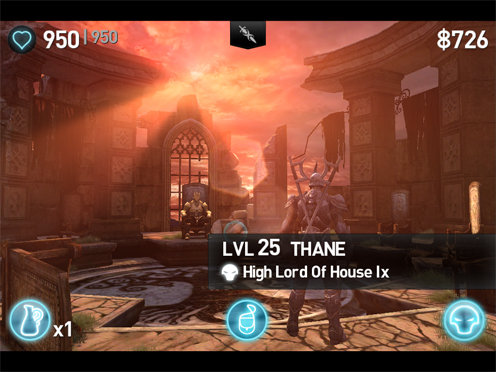 Once you’ve fought enough minions, you get to a boss. The first time you play through he may well hand you a beating, but the beauty of the game, as in the original, is that you immediately get to play through again, with all your equipment and skills intact, and try to do better. (Oddly, if you lose to a minion, you’re allowed to restart from the beginning of that fight, but bosses who beat you trigger the repeating-plot mechanism and send you back to the start.)

There’s more depth than in Infinity Blade, with around four times the length of play. Instead of a brief and simple run through to the God King, you have a comparatively complex set of routes that can take you to various ‘Deathless’ bosses. 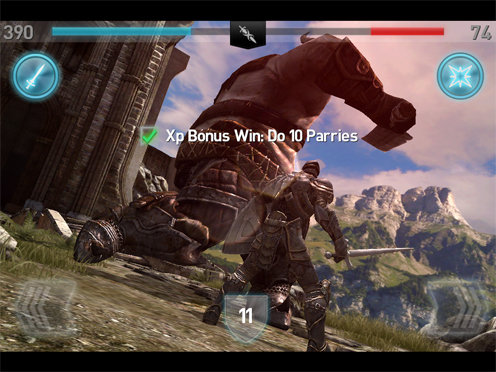 The fights themselves make more of an effort to encourage you to mix up your techniques. In the first game we tended to rely almost exclusively on the dodge (easier than parrying, and not limited like shield blocks), but dodge too many times here and your character will get exhausted. Sometimes enemies will use punches and kicks that can’t be parried. And each battle offers an XP bonus if you use a particular technique a certain number of times.

There are also multiple fighting methods: as well as the classic sword and shield, you can dual-wield (losing the block but gaining faster attacks and a ‘duck’ button) or fight with a heavy, two-handed weapon. And you can upgrade weapons with special abillity-enhancing gems, like the Materia in Final Fantasy VII. 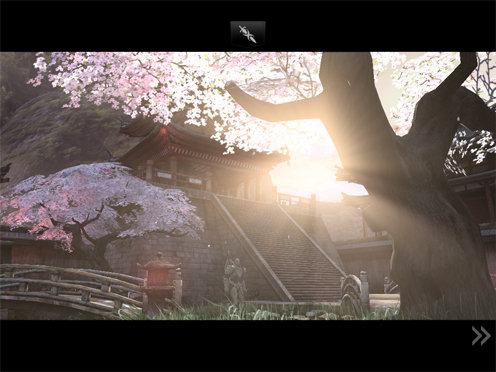 There’s a few changes we’re less keen on. The story, for one thing, lacks the cute simplicity of the first game, where you die and promptly come back two decades later as your avenging son – the first time you died in that game there was an ‘A ha!’ moment, where you grasped the neatness of the premise. Here there’s more going on plot-wise but less of that instantly pleasing sense of elegance.

It also seems to take longer to get going, thanks partly to what I feel is an ill-judged opening section where, having just beaten the God King from the first game, you’re strolling around with super-powerful gear. Any veteran gamers will know at once, as I did, that those items are going to be taken away, but you actually hold on to them for long enough to level up a few times. When (spoiler alert, I guess) you do get double-crossed – pathetically easily, incidentally – and lose the Infinity Blade, the sense of accumulation, of working your way up from rusty second-hand rubbish to godlike armour and weapons – the essence of all RPG games, as Infinity Blade cannily realised – is diminished.

For some odd reason Chair seems to have decided that a very minor element of Infinity Blade – the occasional bags of gold you could spot in the background and pick up by tapping them – needed to be beefed up, and now there are hundreds of them. Instead of sitting back between fights and taking in the astonishing views, you end up obsessively playing what amounts to a childish game of ‘Where’s Wallet?’

And one minor final caveat is that it’s an even more unwieldy download than the first game – it’s gone from 594 to 939MB, and takes an absolute age to install.