Potentially, the cleverest part is the smart catalogue where you can produce a catalogue based on searching what has already been indexed. Unfortunately, if you have thousands of files with typical digital camera names and no tags, it’s of less use. The metadata search is text based rather than allowing you to pull up every image shot at f/1.8, for example.

If you have a several external drives or CDs and DVDs with thousands of image files on them, actually finding files that you want can take forever. That’s what DiskLibrary wants to set right, cataloguing and sorting all your images even when that drive or media source has been removed.

All files and metadata remain in the system, as do thumbnail images for all formats from JPEG to Raw, though it also depends on what the media source was, even when the media is removed. 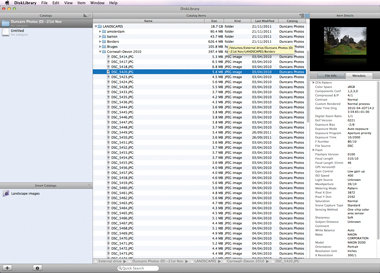