The 3TB capacity of the Seagate might well appeal to you, as the larger the disk the more you’re going to be able to store on it – more movies, more photos and more music in one place. However, the GoFlex Cinema is a fairly basic affair and the inability to connect to a network may well put you off. It’s nicely designed and comes from a well-respected name in hard disks, but the price might be a little too high for some.

The GoFlex Cinema tops our group test with the largest capacity here – up to 3TB. That 3TB behemoth will take you some time to fill up with movies, music and photos. Yet the GoFlex Cinema isn’t large, in fact the box is smaller than some of the others we looked at here.

On the back the connections are simple; a single HDMI port and the older composite type, with yellow for video and red and white for audio, as well as an optical out for digital audio connections. The USB ports on the side allow you to connect the disk to your Mac for copying data across and for extending the storage capacity.

The only real letdown of the GoFlex is the interface. It’s not that the Seagate design doesn’t work, it’s just a bit basic. In and of itself that’s not terrible, but put it up against the other units on test here and it’s clear that the other manufacturers have put a bit more thought into it.

As the Seagate is part of the GoFlex range, you’ll be able to update it at a later stage. Simply unplug the video end of the device and plug it into a new GoFlex compatible disk. This means that in a few years when 50TB disks are available, you’ll be able to easily upgrade the storage capacity of this drive; the caveat being that this requires a Seagate drive and the GoFlex range to continue for years to come.  connectivity, so if in a few years you want to add Thunderbolt for faster transfer speeds that should be possible. 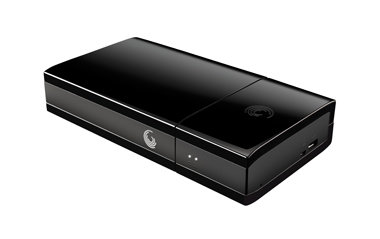 There are no network ports on the Seagate and it doesn’t have WiFi either, so this is another drive that you’ll have to connect to your Mac physically to copy your media across. This also means that there are none of the interactive online services available either.