We can’t imagine the nano replacing the standalone watch for a while yet, but this strap is a great accessory for runners who are enjoying the improved pedometer function.

hen Apple updated its iPod nano a few months back, some observers were rather mystified by the amount of attention given to its 16 new clock faces. But wearing the nano as a wristwatch is a popular technique, supported by a large market of third-party strap accessories, such as this handsome model from iWatchz.

It’s easy to attach the nano – you simply open its clip and slide it on to the plastic centre piece – and we felt confident that not even the most frenetic of workouts would dislodge it.

And even though the nano’s built-in clip makes a strap seem unnecessary, the wrist is a convenient place for the nano to live. With headphone wires threaded down the sleeve of your T-shirt to the wrist, they’re less prone to whip you in the face while running, and it’s easier to access the controls and activate a power song or get a distance calculation than when clipped to a shorts pocket.

The strap itself is well made, with a pleasant, robust feel and attractive diamond patterning. The silver stitching on our review sample was a tiny bit wonky, though. 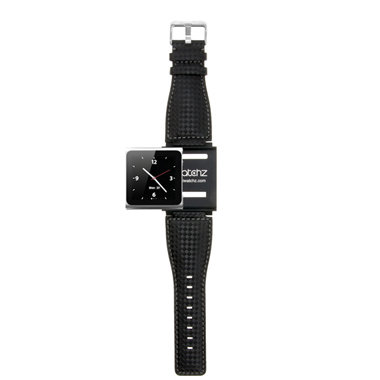 This strap lets you turn an iPod nano into a wristwatch

Returning to those clock faces meanwhile, the nano doesn’t make an amazingly good watch. Compared to a digital watch, its battery life is obviously appalling, and waking it to check the time is a two-handed manoeuvre – you need to make sure you select the ‘Time On Wake’ option under Date & Time, or it’ll default to the track currently playing, plus there’s no speaker so the alarm only sounds through the headphones. And petite as the nano may be, it looks a bit big on the wrist in the place of a traditional watch.

iWatchz’s Q and Timepiece straps are available from the Apple store, while this Carbon model can be had from Expansys.com.