If you’re into gaming the PlayStation Vita makes a lot of sense. It’s a well-built dedicated gaming system that’s a lot like having a PlayStation 3 in your pocket (or at least in your bag). What it lacks in versatility it makes up for in focus, which is no bad thing. The OLED screen is beautiful, its innards are powerful, the controls are precise and it has a good selection of games at launch. Longer battery life would be nice, though.

Thought that Sony was doing the sensible thing and exiting the handheld market? Not likely, it’s returned with a vengence with this: the PlayStation Vita, an all-singing super-duper upgraded version of the PSP with everything but the kitchen sink included. It blends the old (physical controls and a cartridge slot) with the new (touch screen, WiFi + 3G, and downloadable games). It’s big, bulky, and powerful. It’s also quite a lot of fun.

Mind you, it takes a certain bullishness to underestimate the impact Apple has had on the videogaming market with the iPhone, iPod touch, and more recently the iPad.

Put bluntly, the traditional videogames market looks screwed. Between Angry Birds making millions for 69p a shot, and FaceBook games like Farmville eating up millions of hours of gamers time, the idea of paying £40 for a game is increasingly looking faintly ridiculous. Game in the UK is in trouble and GameStop in the US seems to be setting up an exit strategy based on hardware refurbishment.

With many gadget geeks and gamers armed with either an iPhone (or some Android variant), and an iPad (or less likely and Android tablet) is there any space for a dedicated handheld device?

Probably not, but from Sony’s point of view, there better be. Both Sony and Nintendo posted losses during 2011, and although the global electronics industry is a large and complicated beast, we can all note that Apple’s revenue grew by 71% during the same period.

Meanwhile the traditional UK games market was estimated to be down by a whopping 25% last year.

Ironically Apple hasn’t shown the slightest bit of corporate interest in the videogames market, the company only ever made one game for iOS (a quite visual poker variant called Texas Hold’Em), which it withdrew from sale last year.

However, Apple’s competent digital distribution platform (the App Store), combined with the relative low cost for development, and the huge popularity of its handheld devices has ensured a vibrant cottage developer scene, and a large third-party gaming developer base.

Nintendo has responded to Apple’s iOS endeavours with a dedicated gaming device with a 3D screen, which seems to have failed to excite the market so far. Now it’s Sony’s turn.

The PlayStation Vita is best described as an upgraded Sony PSP with every new piece of technology thrown at it. Superficial it sports a similar design to Sony’s early handhelds (a black oblong with a horizontal screen with controls on either side) but where it excels (or over-compensates) is with its controls.

Deep breath: the PlayStation Vita sports dual analogue sticks, four regular buttons, a d-pad, two dual action shoulder buttons (you can tap either side of the button for different input), an accelerometer, gyroscopic compass; multi-touch display, and touch sensitive rear display (we presume because Sony didn’t want a single surface that wasn’t input-ready in some sort). 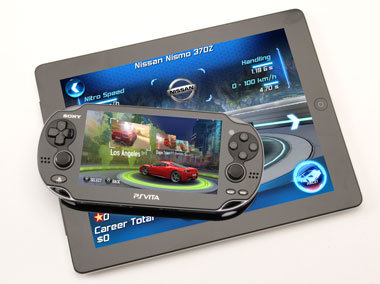 For the launch lineup this means that some games are hilariously attempting to shoehorn in every single control method as Sony showcases its technology, leading to some gaming experiences with hand contortions akin to playing Bop It Extreme.

Sarcasm aside, the presence of touch surfaces and gyro controls ensures that the PlayStation Vita delivers a lot of the input functionality of iOS devices, The difference being the addition of full physical controls. It’s especially pleasing to see that Sony has finally embraced dual analogue sticks in portable gaming, finally ensuring a similar experience to Xbox or PlayStation 3 gaming on the go.

In terms of graphics performance the PlayStation Vita really isn’t that far from the PlayStation 3 either, which is a hell of an achievement for a handheld device. Although this does beg the question of how pertinent the current generation of consoles are if the next wave of smartphones and tablet devices are going to be on par with Sony’s flagship product.

One truth that few people talk about on the iPad (as well as iPhone and Android devices) is that no matter how great Angry Birds is, a touch-screen display and motion controls suck when it comes to traditional games like Grand Theft Auto, Batman: Arkham City and Modern Warfare. And these are big and popular blockbuster titles, making it hard to dismiss their value to the gaming community.

The physical controls of the PlayStation Vita ensure that many gaming experiences are simply better than they’d be on a touch screen: more precise, fluid, intuitive, and you can give the display your full attention, neither having your thumbs covering up part of the screen, or having to focus your eyes to find the virtual controls.

Not the only fruit

In many senses we are openly comparing Apples and Oranges here, because both devices clearly offer markedly different features and have a different aims. Sure the PlayStation Vita has analogue thumbsticks, and the iPad doesn’t. Would the iPad be better with thumbsticks? Of course not, that’d be silly (not that it’s stopping Nintendo, mind). And anyway the iPad does all kinds of things: email, photo editing, movie making, and so on.

The PS Vita (as with the 3DS) is primarily a games machine with some networking features bundled in; the iPad is a new class of device (that performs some of the key tasks of desktop computers, including gaming, in a better and simpler format). But let’s compare and contrast anyway:

On the one hand we have the iPad with its gorgeous 9-inch multi-touch display, up to 64GB storage and 10 hour battery life.

On the other we have a Vita with a smaller five-inch screen but with an extremely good resolution (960×544 pixels, 220 ppi) with OLED technology. The screens on both devices are pretty special, although the iPad’s is obviously larger.

Sony does have a couple of nice web-enabled functions though The first is the PSN Store, which is a joy to use even if it’s a lot emptier at the moment than the App Store; the second is online gaming that works not just well between PlayStation Vita users over WiFi and network, but also between PlayStation Vita and PS3 gamers; there’s also a new service called Cross Play which enables you to play compatible games on your PS3, and then pick up where you left off on the PlayStation Vita version, and jump back and forth between the two.

Technically the PS Vita has a slight technical edge in performance over the iPad 2, which is almost certainly going to be wiped-out in a few weeks time when the iPad 2S/3 is launched. The PS Vita has a battery life of between 3-5 hours, which seems anachronistic now that we’re getting used to devices lasting all day.

Also, can somebody please slap Sony for including a propriety cable with the PlayStation Vita. Yes, we know the iPad has a propriety cable in the form of the Dock Connector, but you know what: it’s the same USB cable that has shipped with almost every Apple iPod, iPhone, and iPad ever made. There are millions of them in existence. Sony, on the other hand, has just shipped the PlayStation Vita, Sony Tablet, and Xperia Play phone in as many months and each one has its own different connection. Until it learns to standardize its devices over a number of years it should be forced (at gunpoint if necessary) to use USB cables for charging and transfer.

The issue of price is another area that rears its head. There’s the fact that the PlayStation Vita starts at a reasonable £209 (Sony must be taking a huge hit on each one sold), although you have to purchase a Sony-branded memory card separately (£27 for 8GB, £37.68 for 16GB). All of which is markedly less than the £400 that the iPad sells for (although also markedly more than a 8GB iPod touch which goes for £169).

Then there’s the matter of the games. For better or worse most games on the iPad only sell for either 69p or £1.49 (one or two dollars in America) and the upper limit–and it has to be a good game to warrant this sort of price – is £5.99 (or ten bucks in the USA). On the PlayStation Vita, however, we can currently see FIFA Soccer (with its 73% Metacritic rating) available for download for the tidy sum of £44.99.

Good luck with that Sony.

There are other examples too like the deeply average Asphalt Injection ( 57% Metacritic rating) trying to sell itself for £19.99 on the PSN Store, whereas the equally bland (but at least not to the tune of £20) Asphalt 6 Adrenaline HD is available on the App Store for 69p.

Good luck with that as well.

This may just be the market ‘trying it on’ with a new platform. As time goes on we may see many of the indie developers seeding Apps developed for the iPhone or iPad to the PS Minis section of the PSN store for the same one-or-two dollar strategy.

If Sony manages to get indie developers on board, then customers faced with being able to buy Real Racing 2 for the iPad or Vita at £2.99, with the ability to play with physical controls, then they may well opt for the Vita version.

And if those budget apps sit side-by-side with the occasional big release (like a new Metal Gear Solid) trying to squeeze £20 or so out of your pocket then that may not be a bad thing.

Maybe there’s comfortably room for both in the market. Sony has shifted a healthy 1.2 million PlayStation Vita’s in the first five days, whereas Apple has comfortably shifted over 40 million iPads.

Apple is expected to increasingly take a huge chunk of the gaming market (a market Apple has shown little interest in to the point of being disparaging about it). We have also heard lots of personal anecdotes about the PlayStation Vita, along the lines of “nah, I’ve got an iPad”.

It’s clear that Sony is taking a big gamble on the PlayStation Vita, and we hope it pays off.  Not that we’d recommend buying a PlayStation Vita instead of an iPad, that’d be plain silly. We can’t envision a sane world in which the PS Vita makes any serious dent in the iPad’s dominance as the portable device of choice.

But as a standalone portable gaming device it has a lot to offer to a traditional gamer. Its physical controls make portable gaming a lot more fun and opens up the type of regular console experience.  And it really is a nice device: well built, nicely thought out, good feature set, and so on. Its future does depend on developer support for new games, however, and that looks shaky to say the least.

The PlayStation Vita is Sony’s swansong, it’s The Last Of The Steam Powered Trains (as The Kinks famously put it). It’s powerful, sleek, fast, complicated, and custom-built for a single purpose, which it excels at. At least it will until it runs out of coal.