To be honest, we’d have been happy with a more conventional design that simply built the USB and FireWire interfaces straight onto the drive itself. However, the GoFlex Ultra Portable drive for Mac is reasonably priced and performs well, and its 1.5TB capacity makes it a good choice if you need plenty of extra storage for your laptop.

We’ve seen a number of portable drives designed for Macs that have both FireWire and USB ports, but Seagate’s new GoFlex Ultra Portable drive for Mac takes a slightly different approach.

Rather than building the FireWire and USB ports onto the drive itself, the GoFlex is equipped with a single special interface designed by Seagate. Also included in the box are two separate adaptor cables that allow you to connect the drive to either a FireWire 800 or USB 2 port on your Mac (a Thunderbolt connector is on the way).

It’s not the most elegant way of doing things, as the adaptor cables are rather chunky, but it does have the advantage that you can buy other adaptors as well – such as a USB 3 adaptor for use with a PC. On the other hand, if you lose these adaptor cables then you won’t be able to use the drive with a conventional USB or FireWire cable.

The drive itself is solidly built, and comes pre-formatted in the Mac’s HFS+ format. It’s quite large compared to some of the portable drives that we’ve seen recently, but that’s mainly down to the impressive storage capacity – 1.5TB, which gives it the highest capacity of any portable drive we’ve seen so far. It’s not badly priced either, at about £160. There are also 500GB and 1TB versions available, although the price for those hasn’t been confirmed yet. 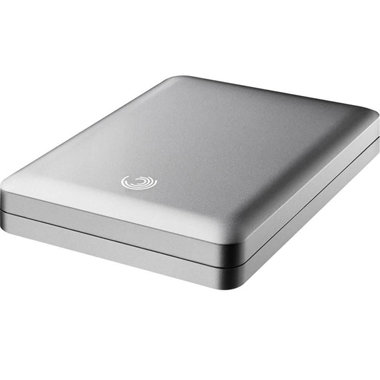 The GoFlex is quite large for an’Ultra Portable’ drive but then it does boast a 1.5TB storage capacity

When using the USB adaptor, the 5400rpm drive mechanism of the GoFlex achieved a data transfer rate of 229Mbps. That’s a few per cent slower than some of the USB drives that we’ve tested in the past, but still perfectly respectable. And, of course, that performance improved significantly when we switched over to the FireWire adaptor – almost doubling to 439Mbps.