It’s nice to be able to talk about gameplay, instead of superficial visual changes, and Angry Birds Space is a proper sequel that opens up genuinely new possibilities. Not every level quite lives up to the new mechanic’s promise, but there’s a huge amount to like here – and no doubt there will be plenty of levels added in free updates. And of course everyone is going to buy it regardless of what we poor critics have to say.

Angry Birds Space is a significant sequel to the Angry Birds series, with new gravity effects that open up a wealth of gameplay possibilties. It’s time to get angry. Here’s our review.

Is there nothing they won’t license to the Angry Birds brand? We’ve had angry cuddly toys, angry board games, angry slippers, angry speakers and angry bins, and now they’ve even come up with an Angry Birds iOS game.

Yes, yes; how droll. But after the relentless barrage of merchandise it’s nice to get back to what created the phenomenon in the first place: highly polished physics puzzles perfectly suited to the casual touchscreen gamer. And Angry Birds Space is a genuine sequel that adds far more to the franchise than new levels and a corny theme (although both of those are included).

As before, your aim is to defeat some villainous green pigs by catapulting various kinds of bird at their houses and mastering the intricacies of gravity and trajectory. The fun thing with Angry Birds Space, though, is that gravity has become a moveable feast.

Taking its cues most obviously from the Mario Galaxy series of console platformers, Angry Birds Space introduces both zero-G areas (in which birds will follow an arrow-straight flight path, and untethered debris will drift around) and mini planetoids that exert their own pull on projectiles in the vicinity. This allows for some intricate trick shots where you bend a trajectory round two or even three planetary bodies to pick off a snoozing pig hidden on the far side of a moon. 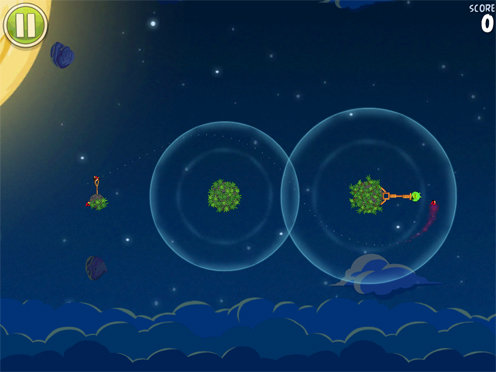 Angry Birds Space has great gravity effects. Here you can see the classic ‘planetary slingshot’, or as they will soon be calling it, ‘The Price Manoeuvre’

It’s great fun (except for frustrating moments when drifting space debris blocks your shot), and can get quite mind-bending at times; although there’s still a few disappointing levels set within a single large planet’s gravitational field which, with aesthetic tweaks, could have appeared in any previous instalment of the Angry Birds franchise. It feels like the makers aren’t as committed to exploring the concept as Nintendo were with those Mario games.

Of course, comparing a £1.99 iPad game with a £40 Wii title – and an all-time classic at that – is setting the bar rather high. 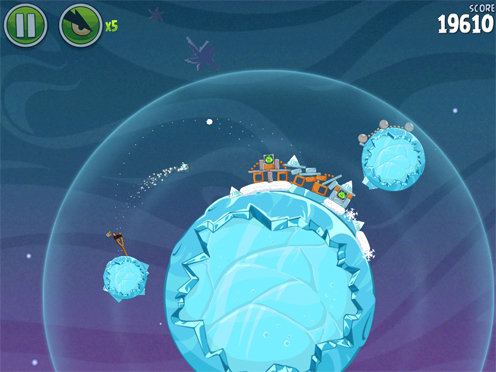 There goes the new ice bird (see below). This is one of the levels where the variable gravity is disappointingly straightforward

Some of the most enjoyably odd moments come when you bump into a concealed ‘eggsteroid’ and get sucked into a wormhole level. The first we discovered recreated Space Invaders, for example; another pastiched Super Mario. There are also a couple of nice boss battles where you have to repeatedly bombard the chief pig with space rocks. And if the 60 standard levels and 5 eggsteroid levels aren’t enough for you, 30 more are available if you unlock the super-hard Danger Zone for 69p. You can try the first of these for free. 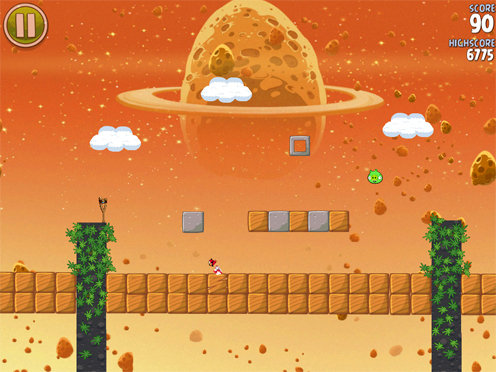 Visually the game is appealingly cute. Each of the birds has been given a suitably galactic costume – the visored red bird now looks a bit like Dame Edna Everage, but the bomb and blue birds in particular have great looks. And the space theme has been carried nicely throughout the level designs. Finally, there’s a new character to play with: the ice bird, who freezes whatever he touches and makes it easier for other birds to smash it up. We didn’t like him much, but it adds to the possibilities.