We love the new iPad, and would definitely buy a newer model for the Retina display. Which one you want depends on your needs, but the 32GB WiFi only model is a good all-round purchase. Only upgrade to the 4G model if you really intend to use the mobile internet on a regular basis. Which colour you choose is up to you, we choose white this time but in general we think the black bezel is less distracting when you read on the device. If money is an issue then pick up an iPad 2 from the refurb store while stocks last or go for the £329 iPad 2 unit (it’s still great and an absolute bargain).

With the new iPad Apple has once-again upped the ante in the tablet market, and pretty much ensured that every other tablet manufacturer is relegated for at least another year. Much has been written about the new iPad, and many reviews have focussed ‘quite rightly’ on the marvel of the Retina display, and how much 4G changes the game. Our UK review, however, has to address the fact that 4G LTE is not available in the UK and is unlikely to arrive for at least another 12 months (and more likely 24 months).

The new iPad (as it’s now known, instead of iPad 3 or iPad HD, as was rumoured) offers several key features. Three in fact: a high-resolution Retina display, Voice Dictation (but not full-blown Siri), and 4G mobile networking functionality.

Mobile carrier companies are still bidding with Ofcom for the right to build a 4G LTE network in the UK, so work hasn’t even begun on the network. It’s unlikely that any service will be up and running before 2013, and you’re likely to see the next-generation of the iPad available before any 4G functionality in the UK. In Australia (which also lacks 4G) Apple is offering a refund to those who feel misled.

It’s not all doom and gloom though, even on a 3G network we noticed significant speed gains using the 3G network. In our speed test pitching an iPad 2 versus new iPad, we saw significant gains even on the regular 3G network provided by Three (using the same Micro SIM and resetting each device before the test).

The new iPad clocked in an average of 6.36Mbps download (at one point we got over 10Mbps) from a Three 3G network; the older iPad 2 averaged 4.36Mbps and never rose above 6Mbps. So there’s clearly something better about the new innards (the combination of newer dual-antenna technology with the faster 4G chipset, perhaps?) 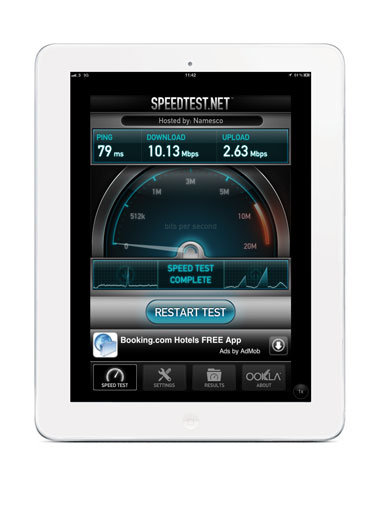 The new iPad clocking in 10.13Mbps from a 3G Three mobile connection in the UK.

And, no matter which way you look at it, 6Mbps is plenty fast enough for just about all tasks you could possibly currently perform on an iPad. It’s plenty fast enough to use the Internet, download video and apps, watch high-definition video, and so on. We’re not luddites, and are sure that 4G will offer a brave new Internet future, but for the lives of us we can’t see why we need 4G technology right at the moment when we’ve got 10Mbps already. In fact, the 6Mbps on the iPad 2 seemed pretty fine to us. Apart from playing a game of ‘numbers one-upmanship’ we’re struggling to see any practical difference.

Of course, that’s easy to say from Central London. The big win with 4G will be (if Ofcom sticks to its guns) nationwide coverage offering at least 2Mbps in any part of the UK. While 2Mbps may not seem much, it’s enough to offer decent basic internet access (including video), and ubiquitous coverage will mean a lot to much of the country. We may get 10Mbps on 3G in London, but you don’t get anything in many rural areas in the UK. 4G will change all that – but it’s still not doing much of anything on the new iPad.

Best results are in bold.  Results for GLBench Egypt Offscreen, GLBench Pro are framerates per second (highest is best); GeekBench 2 (by Primate Labs) is a benchmarking tool (highest is best). Sun Spider 0.9.1 is a Java Script web test measured in seconds (lowest score is best); Load a Web Page is how short a time it takes each device to load the same page i n seconds (lowest score is best); Speed Test is an iOS app for measuring network performance, and was used with a Three 3G SIM in central London card to test download and upload speeds, results are in megabytes per second (highest is best).

The next key feature, which we’ve very much got on the new iPad, is Voice Dictation. Although Siri itself is missing from the iPad you can use your voice to dictate notes, emails, and messages. Tapping the mic icon on the keyboard starts Voice Dictation, while a second tap stops to the functions and transfers your audio message into the written word. It takes some practice to get used to saying things like ‘full stop’, ‘comma’, and ‘exclamation mark’, and voice dictation certainly improves over time, so it’s worth getting used to it. And there is undeniably something quite ‘Star Trek’ about dictating messages to your iPad.

Although it’s slightly disappointing that Siri itself (the feature where you can control functions and ask questions) is missing. This must be because Apple feels Siri isn’t quite ready for the iPad yet. Siri is still officially classed as a ‘beta’ function on the iPhone (which, for Apple, is quite rare). Although it works reasonably well (there’s still no support for searching businesses in the UK), it’s clearly a work in progress. Apple hasn’t stated any official reason for leaving Siri out of the new iPad, we presume it’s because people will use Siri more frequently on a kick-back device like the iPad, than one you’re using on the go, like the iPhone; and that on an iPad it’s omissions and errors will be all the more pronounced.

Still, we have faith that Siri will be released for the new iPad one day, there certainly doesn’t seem to be any technical reason for the omission (unless there was some concern over processor usage and battery life). 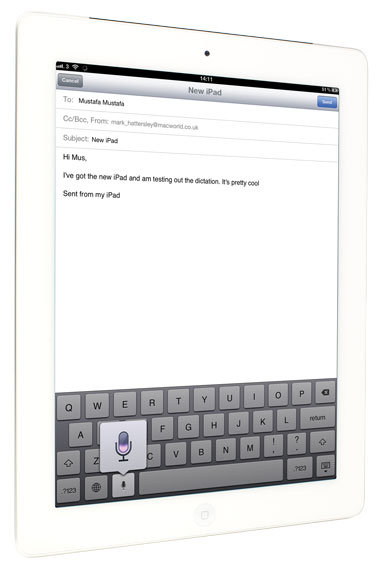 Voice dictation on the new iPad works well, but we miss not having Siri to play around with.

The main attraction: look at that Retina display

The term Retina is used by Apple to refer to a display with a PPI sufficiently high enough that a person with average eyesight will no longer be able to tell between individual pixels (so there’s little point in going any higher). There’s some grumbling about what the actual point is (it varies depending on your eyesight) and 300PPI is about right, but because the iPad is generally held further away than the iPhone the slightly lower 264 PPI ensures you can’t tell between pixels.

The new iPad Retina Display (left) versus iPad 2 display (right). When looked at under a photographer’s loupe you can see the difference in pixel quality. It makes text much easier on the eyes.

You can argue the toss, but one thing’s for sure: the new iPad display is pretty special stuff. It looks amazing, especially when reading text. It’s especially good when using iBooks and Safari.

Whether the effect of the new display is immediately noticeable is something for debate. Some members of the team couldn’t really tell at first glance, other team members went “so that’s the new… wow, look at that screen”.

But after using the new iPad for a while you get used to the higher quality display, and going back to the iPad 2 is a step back for anybody. Perhaps the most honest answer is that it’s a clear improvement over what was already a blindingly good display.

Which makes life somewhat tricky for other manufacturers because Apple has, wisely, kept the iPad 2 on the market, which it’s now selling for the ludicrously good price of £329. Let’s assume (rightly) that no other tablet manufacturer has been able to match the success (either commercial or technical) or the iPad 2 over the last year for the same price bracket, we can’t imagine how they’re going to cope with an even cheaper model.

Much of the other new technical features on the new iPad don’t expressly make the device functionally better, but do retain the same level of performance with the improved screen. So if you can live with a good, but slightly lower resolution, display the iPad 2 is a real bargain.

What else is new?

There’s notably a faster A5X processor with two CPU cores and four GPU cores (twice as many GPU cores as before). This means that the iPad can run the higher resolution display with roughly the same amount of performance.

A teardown of the device has revealed that the battery is far larger than before (with most of the other innards shrunk down to fit accordingly). As a result it Apple can still comfortably claim a good 10 hours of battery life, which our tests have borne out. What should be mentioned is that the battery takes significantly longer to recharge than before, up to six hours from the mains versus approximately two to three hours before. It also displays ‘not charging’ sometimes during use when connected to a USB port on your computer, so it takes all the power to stay level rather than charge up (it does, however, charge when connected but switched off). Again, it’s something to consider but not really a major issue for us (no matter how hard some people try to make it out as one). 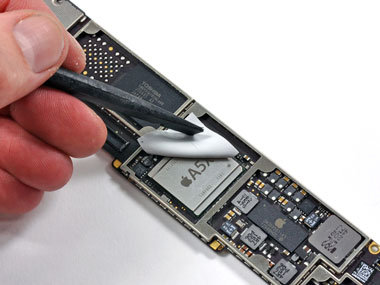 On the whole we think Apple is still striking the right balance between power, speed, usability, long-term performance. Putting a quad-core CPU might have boosted power at the expense of battery performance, for example. Although it takes longer to charge, it retains the power long enough for it not to be a major problem.

The one clear difference is that the device runs slightly warmer (note: that’s warm, not hot). Don’t pay much attention to heatgate-style stories about the device failing in hot environments. The same stories existed for the iPhone 3GS, iPhone 4, iPad, and iPad 2. Fundamentally it boils down to: if you live somwhere hot (say… Death Valley) the device might shut down for half an hour if it detects itself overheating because it wants to save the processor from malfunction. We have only once seen this happen in the UK and not at all with the new iPad. It’s not a defect, it’s a safety feature. If it didn’t have it you’d have to return the iPad for repair.

Should you get a new iPad, and if so which one?

The new iPad is a remarkable device and the screen is gorgeous. As with the iPad 2, and original iPad, we have no hesitation in advising you to buy one. If you had an original iPad then you’ll find the jump to the new iPad worth the investment; if you have an iPad 2 then the difference is slighter, but the higher resolution display is definitely a noticable improvement. Having said that you could always wait until the next new iPad comes along.

The price is still a key feature, and with the iPad starting at £399 (and it offers a lot of bang for that cash) we really don’t see any reason not to get one. And, if you think that’s too steep you can now pick up an iPad 2 for just £329. We’ve even seen iPad 2 units going on the Apple refurb store for just £289, which is an incredible bargain. There’s never been a better time to get an iPad than right now.