Despite its state-of-the-art 3D graphics, Rage is really an old-fashioned shooter in the same mould as the now-ancient Doom and Quake. Don’t expect a deep, engaging storyline, but if you enjoy the simple pleasures of big guns and endless fragging then you’ll feel right at home amid Rage’s rubble-strewn landscapes.

Rage isn’t going to win any awards for originality, but it’s an enjoyable, action-packed shooter, decked out in top-notch 3D graphics. The game is set in the near future, following an unfortunate collision between the Earth and a large asteroid. Emerging from your underground bunker after a cryogenic snooze, you discover a post-apocalyptic wasteland dominated by bandit gangs, creepy mutants, and a shadowy organisation called The Authority.

You’re immediately attacked by bandits, and rescued by a bruiser called Dan, who helpfully gives you a gun and a nippy little all-terrain motorbike and sends you off to slaughter the entire bandit camp. That’s pretty much the game in a nutshell. The action consists of a series of quests that generally involve driving across the wastelands and blasting the bejesus out of anyone that gets in your way. The story isn’t terribly involving, but this is an id Software game, and that means it’s all about the guns.

On that score the game doesn’t disappoint. As you blast your way across the wastelands you’ll come across a variety of body-bursting weapons, including hand guns, shotguns, big fat rifles, razor-tipped boomerangs, and a futuristic crossbow capable of, er, mind control.

You can also upgrade your vehicle and use that as part of your armoury. The driving and racing elements add a bit of variety to the game, but we were disappointed that the Mac version lacks the Road Rage multiplayer racing mode available in the PC version, as well as the two-player co-op missions. The system requirements are also pretty high – Lion is essential, along with a fairly powerful graphics card. 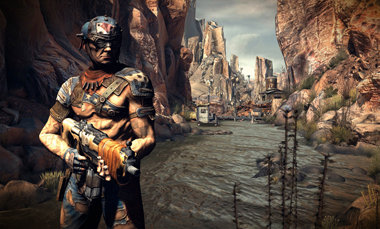