iStopMotion for iPad is a lot of fun to use. The time lapse feature and its ability to connect to another iOS device’s camera over Wi-Fi make this app extremely versatile. It’s just a shame that there are hardly any editing tools built in.

Stop-motion animation can be a tricky process. But iStopMotion for iPad makes it very easy to do, since everything you need can be achieved straight from your iPad (version 2 or better).

The interface is incredibly simple: you can choose to use either the front or back camera, set up your shot and tap on the big round button on the right-hand side. You then have to either move the object you’re animating, the camera, or both, before taking another shot to give the illusion of movement when you play back your film.

To ease this, iStopMotion overlays the previous shot on to the current frame by default, so that you can see what needs to be changed. This makes shooting a short scene incredibly easy to do. You can then add a soundtrack and save your film to your iPad’s Camera Roll or upload it to the web.

If this was all it could do, then it would be a nice fun app, but iStopMotion goes a lot further. One great feature is Time Lapse. You can set your iPad to take a shot once every second or once every hour, helping you to animate objects without having to record a frame manually each time (you can also delete frames afterwards if you found yourself accidentally in the shot in some of them), or take shots throughout the day to record the passage of time. 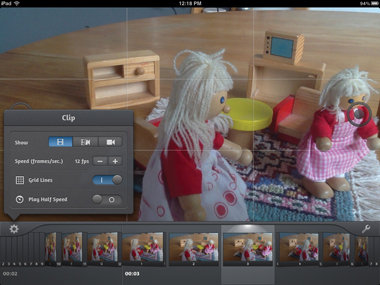 Even better, with its free companion app installed on your iPhone, you can connect your iPad to it and use your iPhone’s far superior camera to make your movie, all controlled from your iPad. It’s therefore a shame that iStopMotion doesn’t work on the original iPad since it can so easily connect to another camera over Wi-Fi.

Aside from being able to delete or duplicate frames, your editing capabilities are limited. You can’t reorder frames or create separate scenes to build a more complex movie – iStopMotion is obviously just there to take the shots. You’ll have to use an editing app such as iMovie to perform a more thorough edit.