Though the program comes with a slew of the most popular pics, you can use your own too. Custom templates can be saved so that you can lazily hack together image macros from any photo. It’s fun and fast and free. Only doubt holds you back, as Courage Wolf says…

Been waiting for a program with the power to produce LOL Cats, Victory Babies and other viral pictures on an industrial scale? We’ve found it and it’s called Meme Generator.

It should be called Image Macro Generator really because a meme is a cultural idea with viral characteristics, according to Richard Dawkin – an image macro is just a picture with a sarcastic phrase superimposed over the top.

Meme Generator makes it very easy to create and then swiftly post image macros to the internet. It comes bundled with a bunch of blank templates that are currently popular, including Advice Dog, Annoying Facebook Girl and the Game of Thrones favourite ‘Winter is Coming’. If you don’t know what we’re talking about, you’re clearly getting out of the house far too much and should spend more time trawling through online message boards.

Meme Generator enables any idiot to assemble a masterpiece of online wit. No Photoshop skills are required. In fact, there’s no image editing required at all. You pick an image, type in a headline and strap, then share your creation via Facebook, Twitter, Tumblr or Reddit. You can also save them out locally to email or share using other services. 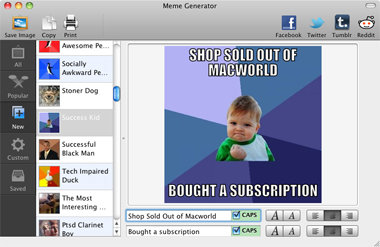