With the introduction of a dedicated iOS app and much-improved streams, TVCatchup has made watching live TV on Apple’s devices a more reliable and enjoyable experience. The makers promise more features are ‘coming soon,’ which can only add value to this already indispensable app.

We’ve looked at TVCatchup before as a useful and popular way to watch a selection of UK based TV channels via your computer, tablet and smartphone.

Previously mobile friendly and iOS compatible, it now comes as a dedicated app for iPad, iPhone and iPod touch.  The service offers a selection, around 50, of free to air channels, similar to Freeview, from the BBC, ITV, Channel Four and Channel Five.

Along with +1 channels from the main broadcasters, TVCatchup adds a choice of channels from the cheap and cheerful end of broadcasting, including the rather addictive Vintage TV, showcasing a selection of suitably old school music videos.

Unlike the online version, where a login is required, viewers simply select channels from a list down the left hand side of the screen, skip an ad, and start watching.

Picture quality was good throughout the test period, with no picture break up or downtime, a major improvement on previous non-app versions.

Apple Airplay compatible, broadcasts can also be played on a bigger screen via an HDMI cable adaptor. 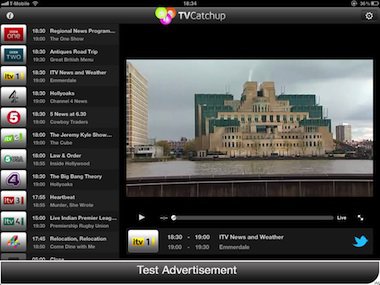 TVCatchup comes with a bare bones now and next EPG, which is occasionally missing listings or simply incorrect.

The option to set ‘TV Region’ for local programming is currently restricted to ITV1 and Channel 4, which realistically means you can choose which local news bulletins to watch. This is a useful way to stay in touch with events back home for those who don’t have a satellite dish.

Additionally, TVCatchup allows you to select ‘Use W-Fi Only’ in settings so you can avoid potentially costly data charges.

It’s worth noting also that while the service is portable it won’t work outside the UK due to the licensing restrictions that prevent UK viewers watching content from overseas.

While the team behind TVCatchup point out that although some students may benefit from current TV Licensing regulations, the vast majority will need a valid licence to watch live TV on iOS devices.