Available in smart and stylish black or white finish, the Wireless Solar Keyboard K750 from Logitech is one man-sized option that doesn’t forsake beauty for brawn. The comfortable and responsive keyboard also makes the K750 an excellent choice for anyone wanting to save the world as well as money spent on batteries.

If you’re a long time user of Apple’s desktop computers you’ve hopefully noticed that as screen sizes have increased, keyboards have got smaller. Logitech offers an alternative to Apple’s shrinking keyboards with the ample Wireless Solar Keyboard K750. Nicely sized, the K750 is 19.1 inches wide and 7.9 inches deep, but at just 1/3 inch thin still feels sleek and manageable. The keyboard uses a small dongle – rather Unifying receiver and Wireless extender – to connect wirelessly to your Mac or PC and appears to offer a good range for anyone choosing to work from some distance. Unlike Apple’s current power hungry wireless keyboard and mice, the K750 promises a much greener alternative using solar power. Logitech claims 828 million AA batteries would be saved per year if everyone switched to solar powered keyboards, adding that a full charge can work for up to three months in total darkness. A pair of solar panels, looking a little like LCD displays, run across the top of the keyboard and are neither a distraction or intrusive. 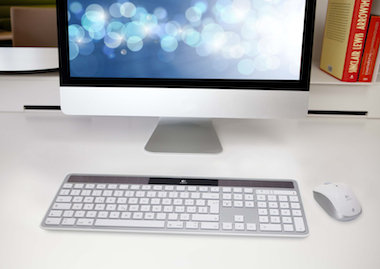 In use the K750 keyboard proved responsive, comfortable and relatively quiet, although lacks any lights to show when the Caps Lock is on or for working in near dark. Build is generally good, the keys appear capable of withstanding a certain amount of wear and tear, although the small retractable feet used for raising the keyboard off the desktop are a potential weak spot. Online feedback on Logitech’s own website suggests some users have suffered from charging issues, especially after long term use. However, during our relatively short time using the keyboard the K750 has worked fine, maintaining a near full charge even during a prolonged period of bad weather. A useful, free Logitech Solar App for both Mac and PC shows users current status and whether your power reserve is increasing or decreasing.