Super Crossfire isn’t particularly original, but it combines the addictive qualities of the old arcade game with a few modern twists and up-to-date graphics. And, at just £2.99, it’ll be a great game for dipping into at lunchtime in the office.

The launch of the Mac App Store has had a big effect on the Mac games scenes. Some old favourites have started to sell really well again and – somewhat unexpectedly – we’re also seeing quite a few games that are coming over to the Mac from the iPhone and iPad for the first time.

Super Crossfire is a real blast from the past. It’s basically Space Invaders dressed up with fancy graphics and a whole stack of weapons upgrades. There’s also one little twist that can come in handy when things get tough.

The format is familiar enough – your space ship sits at the bottom of the screen, dodging the waves of incoming alien invaders and blasting away like crazy to destroy them before they destroy you. The game is a lot prettier than Space Invaders, though, with almost psychedelic explosions and special effects washing across the screen.

There are 150 waves of enemies, organised into a series of ‘chapters’, and 19 different types of enemy craft, each of which has different movement patterns and weapons, ensuring that the game should provide quite a few hours of casual gaming action. You can play with keyboard and mouse or gamepad, and play in either full-screen mode or keep the game in a smaller window that you can quickly hide when the boss walks by (and the sound automatically cuts out as soon as you put another app or window in front of it). 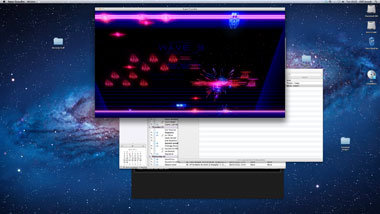 As you complete each level you gain victory points that allow you to unlock new chapters and weapons upgrades. However, the game’s big trump card is the ability to ‘warp’ – to send your ship up to the top of the screen so that you can fire on the enemy from behind. It’s not exactly a groundbreaking innovation, but it adds an extra twist to the action and makes this one of the best arcade conversions currently available on the Mac.