The level of blood and violence in The Darkness II might well turn some people off, yet the game does have a certain gory gusto to it. If you’re a fan of deranged horror movies like The Evil Dead and Brain Dead then The Darkness II will be right up your street.

Whatever you do – keep this away from any young kids, cos they’ll probably never sleep again after seeing The Darkness II in action.

The original Darkness game was never released on the Mac, but this sequel thoughtfully includes an introductory sequence that brings us all up to date. Based on a comic book – and presented with an atmospheric, comic book style of shaded graphics – the Darkness II is a kind of cross between The Godfather and The Exorcist.

You play the role of Jackie Estacado, a gangland boss who has been possessed by a demonic force known only as The Darkness. Jackie keeps his dark side under control most of the time, but when he is injured in an attack by a rival gang Jackie has to let rip and draw on The Darkness in order to survive and track down his mysterious enemies.

And ‘rip’ is the operative word here. If it weren’t for the demonic twist, Darkness II would be a fairly routine shoot ‘em up. But when his dark side takes over Jackie sprouts a pair of ‘demon arms’ – whiplash tentacles that end in slashing teeth and allow you to savage your enemies, hurl objects around, and rip off car doors so that you can use them as shields. 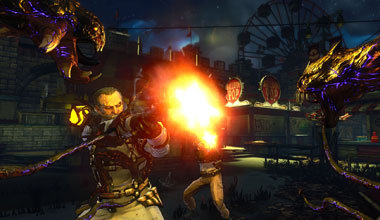 These demon arms ramp up the pace of the game as you’re effectively quad-wielding weapons – blasting away with a gun in each hand and tearing up the scenery with your demon arms at the same time (and say goodbye to your trackpad – you’ll need a two button mouse or game controller to juggle that lot).

There are, surprisingly, some tender moments as Jackie encounters the ghost of his dead girlfriend and gets a bit broody about the whole demonic possession thing. However, those are just brief interludes between bouts of bloodletting. The Darkness II really is outrageously bloody, and well deserving of its 18 rating. The main single-player game isn’t all that long but there’s also a four-player Vendetta mode that you can play by yourself, or online with others, after the main game is finished.