One of the most technically impressive iOS games around, but such surface achievements are laid low by wobbly controls, and uninsipring story and a mercenary streak a mile wide. It’s a premium-priced promo app for a new console game that even includes its own real-money item store: Infilitrator is the Inception of cash-ins.

Mass Effect: Infiltrator is a beautiful but mercenary spinoff to the wildly popular Mass Effect series.

An odd question hangs over this iOS spin-off of the wildly popular console/PC sci-fi series Mass Effect. Is Mass Effect: Infiltrator truly a game in its own right, or is it a cynical cash-grab for players who want what it unlocks in the newly released Mass Effect 3? Items collected in this good-looking shooter can effect the ending of Mass Effect 3, which has proved a source of some controversy.

It doesn’t help that, underneath its impressive graphics and faithfulness to Mass Effect’s many aliens, weapons and psychic powers, Infiltrator is a right old pain to play. It’s worked hard to come up with a swipe-based cover system and a halfway house between auto-aiming at enemies and lining up your own shots, but while conceptually a thoughtful use of touchscreen controls, it doesn’t quite work in practice. The sci-fi secret agent you play as will too often randomly launch himself into the open, refuse to aim at what you want him to aim at or mysteriously fire at nothing. Even when it does work, the only thing that keeps the combat from samey tedium is the wildly spiking difficulty.

If you can come to grips with its finickity controls, you’re in for a generous selection of weapon, power and armour upgrades and an insubstantial but inoffensive alternative perspective on one of Mass Effect’s more compelling side-stories, the anti-alien, body modification-obsessed cartel named Cerberus. The plot won’t make a huge amount of sense if you don’t know Mass Effect well, but on the other hand it’s paper-thin enough not to get in the way of the awkward action. 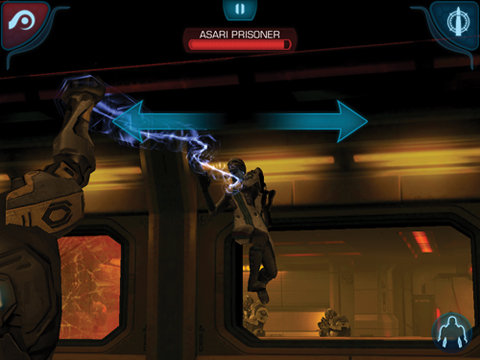 It’s a shame the impressively meaty graphics weren’t twinned with something less frustrating and plodding to play. Infiltrator’s onto something, but it doesn’t pull it off well enough to escape cynical cash-in status.