If you can cope with the sensory overload then Violet Storm is pretty good fun. There’s not an awful lot to it, but it’s good, mindless fun for your lunch hour or after a few drinks down the pub.

I spent a fair chunk of my student days playing Asteroids in the college common room, but I’ve been disappointed by the various Asteroids clone that I’ve seen on the Mac App Store so far.

Violet Storm isn’t a strict Asteroid clone, as you’re fending off waves of enemy ships rather than simply blowing up lumps of wandering space-rock, but it does capture something of the frantic shoot-em-up feel of my old favourite.

Originally developed for iOS, Violet Storm puts you in charge of a little space ship that you pilot around the screen using the WSAD buttons on your keyboard, while using your mouse to simply blast the living daylights out of the enemy ships around you.

You start out with a simple laser, but fending off successive waves off attackers earns you weapons upgrades, such as multi-laser blasts and deflection bombs that buy you more time by pushing away approaching ships. The graphics and sound effects are completely over the top, with weapon effects that look like a psychedelic screen-saver and a thumping soundtrack that sounds like a gay disco circa 1985 (which is either a good thing or bad thing, depending on your point of view). 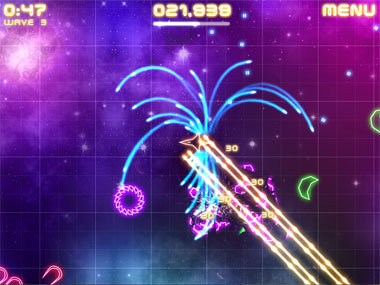 The main campaign mode simply swamps you with wave after wave of enemies, but there are two other modes available as well. Sniper mode measures the accuracy of your shooting, while Speed Havoc challenges you to kill as many enemies as possible within a time limit. At £1.49 Violet Storm is cheap enough to be an impulse buy, but there’s a Lite version that you can try out for free first. And if you’re looking for something that does actually involve using your brain then the developers at Sad Cat software also make a game called Ultraviolet Dawn that adds elements of outer-space trading to the shoot-em-up action.